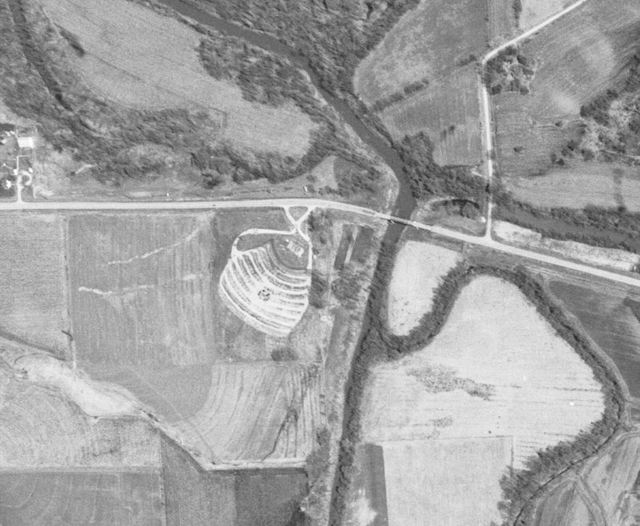 On July 4, 1953, BoxOffice reported: “Newest addition to the open-air theaters in this area is the Frontier Drive-In, located just across a bridge on Highway 92 west of Knoxville. Operated by the Kerr Theatre, the theatre opened for business June 26, 1953. The building which houses restrooms, concession stand, projection room and storage space, resembles a log stockade. Space for 425 cars is available.”

Google maps to 41.323896, -93.151693 right next to White Breast Creek where the bridge used to cross when McGregor Rd was Route 92. Appears on 1964 Aerial map on historicaerials.com. It looks like it was already closed by that time.

The 1964 aerial photograph shows the screen is gone. No trace of the drive-in remains today.

The Frontier was still there in 1962 when Carl Schwanebeck gave away a diamond ring to mark the drive-in’s ninth anniversary, according to a note in the Aug. 6, 1962 BoxOffice.

But the Frontier was gone by this June 10, 1964 note from Motion Picture Exhibitor: “Earl Kerr has opened the new Hi-Vu Drive-In, Knoxville, Ia. The new drive-in replaces the Frontier Drive-In. The federal Red Rock dam project necessitated the move.”