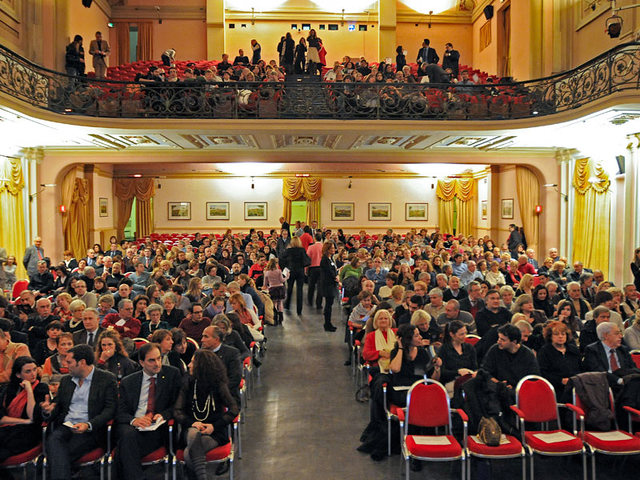 Located in the historic Palazzo Capranica, original constructed in 1679. The theatre within featured performances of plays and operas through the 19th Century. In 1922 it was coverted into a cinema to the plans of architect Carlo Wallis. Many films of importance would have their premiere runs here, including Rossellini’s “Paisa” (Paisan) beginning March 7, 1947. Around the block the “Little Capranica” or Capranichetta gets its name from this larger theatre. The Cinema Teatro Capranica stopped showing films several decades ago and is now used for concerts, special events & conferences.

I saw Andrzej Wajda’s film “Les possédés” here on July 12, 1989. It bore the title “I demoni.” It was the only time I ever visted this theatre. I remember the interior being gorgeous.

On May 18, 1940 the Capranica was showing the French film “Belle etoile” under the title “Sotto le stelle.” It starred Michel Simon and Jean-Pierre Aumont. Also on the program, according to the listings in Il Messaggero, were variety acts that included one L. Dolliveri.

On March 15, 1950 the popular soap opera film “Catene” opened here and at the Europa. Directed by Raffaello Matarazzo.

Rossellini’s landmark film “Paisa'” (Paisan) had its opening run beginning here on March 8, 1947 after a premiere gala the day before at the Capranichetta. It ran here and at the Imperiale.