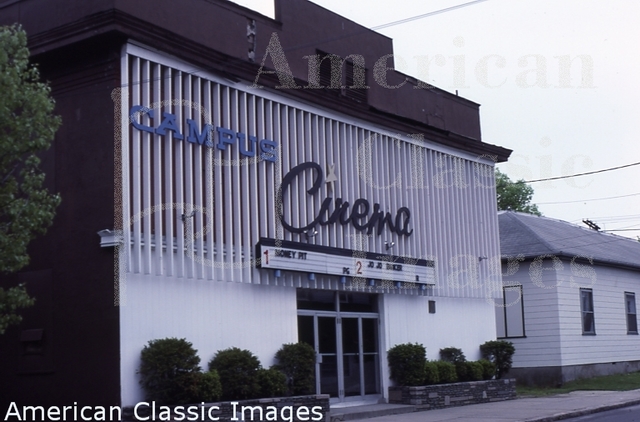 The Campus Cinema, so named due to its proximity to URI, in Wakefield is currently closed and empty. Despite a major renovation in 1998 that fixed up the building and added a third screen it closed down in July 2003 because of a 70% decrease in business due to the Entertainment Cinemas South Kingstown 8 opening minutes down the road.

The Campus Cinema was converted into condominiums in 2004.

Movie house to shut down

“It breaks my heart to do this,” said Patel, who bought the theater in 1998 and added a third screen. “After a while it became a foregone conclusion. I kept hoping the losses would stop but they didn’t.”

The Wakefield theater already has lost $70,000 through this year, according to Patel, and his three-screen Narragansett Theater in the Pier Marketplace has lost an additional $60,000 to date.

Patel said the trend dates back over the past three years, long before his theaters had to compete with the eight-screen Entertainment Cinemas that opened last summer in South County Commons on Route 1.

“I was losing money before they got here,” Patel said. “I’ve supported the community for three years in a row, investing more than a million dollars. It’s not the quality of the product or service – the movies just got overbuilt in South County. There’s not enough business to support 14 screens.”

Patel said he is formulating a new business plan and may try to bring dinner theater to the building at 17 Columbia St. He closed his Park Cinema in Cranston earlier this year and after receiving a liquor license from the state and Town Council reopened it to dinner theater.

“A similar concept may work here,” Patel said. Beyond the installation of a stage and lighting, he said he would need a liquor license from the town of South Kingstown to make the dinner theater realistic financially.

In many ways, Patel’s backup plan would be a return to the roots of the location.

First known as Wright’s Hall, the barn-style building opened in 1882 and became known as the Wakefield Opera House six years later. The hall was part of the village center that belonged to another time, long before council members and residents grappled with what continued development in South Kingstown would mean to the fate of the small businessman.

In 1978’s “A Stroll Through Memory Lane,” South County historian Oliver H. Stedman remembered that the theater got its start after the burning of Columbia Hall in the summer of 1882. After a few months of reconstruction, the hall opened to traveling minstrels and stock productions before the birth of “moving pictures.

“Ten, twenty and thirty cents were the prevailing prices, the center of the hall being the thirty cent section where one felt obliged to sit while having an evening out with wife or sweetheart,” Stedman recalled.

John W. Miller of Narragansett was the longest owner of the theater, buying the building in 1915 and making plans to rebuild after a serious fire in 1918 as he prepared to head off to France to serve in the Army during World War I. Miller continued to lease out the theater until his death in 1965, when his wife took over, rebuilding after a 1968 fire and continuing to lease the building until her own death in 1979.

John W. Miller Jr. of Narragansett said the family finally sold the sometimes-literal hot spot in 1981. Miller remembered how the hall was used for dancing after the much shorter movies of the early 1930s and said he’s not surprised the theater is closing, especially with the competition on Route 1.

“I naturally feel a little nostalgic and sentimental about the whole thing,” Miller said. “I just hope something good can come out of this for the public.”

Patel said he will continue to operate the Narragansett Theater to see whether the closing of the Wakefield location buoys business. Far from laying blame, Patel said he hopes Entertainment Cinemas sees a stronger business for the community’s sake, so people can still enjoy movies in South County.

A very attractive framed photograph of this theatre in 1942, when it was known as the Community Theatre, can be seen in the lobby of Pi Patel’s nearby Narragansett Theater.

There is an organization called “Project Venue” in the South Kingstown Senior High School that is searching for a place to hold local shows, music talent, poetry, and such, and I remember that this building was brought up for a possible place. The building doesn’t seem to be changing into condos (I believe there was a zoning problem). The only problem was that this building seems to be an expensive place to buy/rent and run. I would love to see it stick around, and be used. If the town, state, or someone rich bought it, and rented it to be used by locals, that would be awesome. I believe my dad went to shows there when he went to URI

If anyone has any information on who to contact regarding this building would be greatly appreciated.

This theatre was part of the September 1923 6th Paramount Week. In this advertisement from the (Providence) Evening Tribune, September 1, 1923, we see a fascinating list of Rhode Island area theatres, many long-gone and long-forgoten, or even unheard of, as well as what they were showing during that week. At that time it was known as the Opera House, Wakefield, not to be confused with the Opera House, Peacedale…also a participant in that Paramount Week. CLICK HERE and move text to see all theatres.

“The Three X Club of Wakefield will hold a week end hop in the Wakefield Opera House tonight, which will be preceded by moving pictures featuring Bebe Daniels in ‘Nancy from Nowhere’ and Conway Tearle in ‘Marooned Hearts.’ Miller’s new jazz orchestra will furnish music for the pictures and dancing. The hall has been tastefully decorated with tri-colored garlands and fancy Japanese lanterns for the occasion, and many electric fans are to be in operation around the hall.”

PHOTO OF COMMUNITY THEATRE IN 1941 IN MGM REPORTS Thanks to Theatre Historical Society of America.