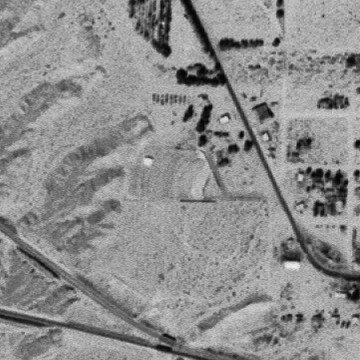 The Sands Drive-In opened on July 31, 1953, showing Richard Quine in “Fighting Command”(aka We’ve Never Been Licked) & Loretta Young in “Fury In The Sky”(aka Ladies Courageous", and a color cartoon. As first reported in my book, Drive-Ins of Route 66:

“This was a small drive-in on Route 66 at the west edge of town, built and owned by Western Amusement, which also owned the indoor Needles Theatre. Ed Crouch managed the Sands Drive-In from the time it was opened until March 1954, when J. W. Speer transferred in to manage both Needles theaters. The drive-in was included in Western’s holdings in Motion Picture Almanac circuit lists through 1959”.

Although its remains were visible for several years after it closed, there’s nothing left of the Sands Drive-In today. The site is occupied by a truck stop featuring Spike, Snoopy’s skinny brother from the comic strip Peanuts.

The outline still remains it is also a shell now