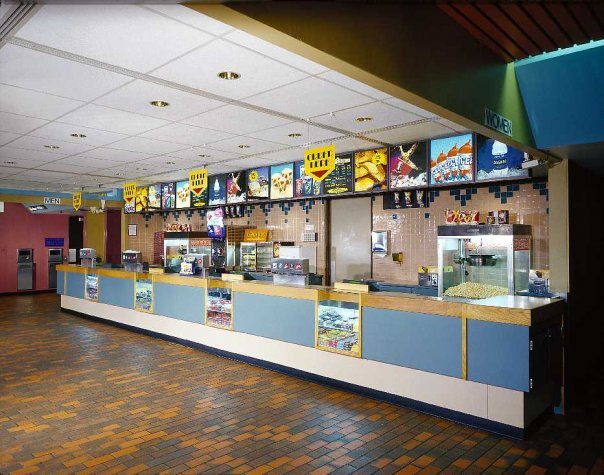 The AMC Ogden 6 was opened on November 5, 1976 and originally had 2,000 seats. This cinema, along with the Barrington Square, were the first movie theaters to have six screens in the Chicago suburbs.

From November 4, 1996 the theater was taken over as a second-run movie house by Classic Cinemas. All tickets are now $3.00. The theatre was re-seated in 2004, and all auditoriums have been equipped with digital sound. The Ogden 6 Theater was closed due to the Covid-19 Pandemic, which closed all movie theatres countrywide on March 16, 2020. It was announced on June 6 2020 that the Ogden 6 Theater would be permanently closed.

Those are photos from 2004. It looks like it’s still fairly AMC simple, but it was a well kept and maintaned complex when we were there.

At one point early in its run as a second run theater, the price was $1.00. Now it’s $3.00. It’s well maintained, and the concession prices are cheaper than AMC or Regal, plus free refills. And, you see 8 movies, you get one free. Gotta love this theater.

The projectors are now all 4K Christie digitals. The image quality is much improved over the battered prints they used to run.

I uploaded the November 5th, 1976 grand opening ad in the photo section for this cinema.

As of today, the petition to save the theatre had more than 13,000 signatures. Recent news that the addition of a second Costco in Naperville would shutter the Ogden 6 Theatres has brought out an influx of protest from fans of the theatre. To further the efforts, a former employee has started a petition to help save the theatre.

The former employee, who has worked at Ogden 6 since 2016 wrote, on the Change.org petition,

“This place is very different than any other movie theater. The experience is personal and you start to remember the faces that come in. I have bonded immensely with the regular guests that come in and I’m forever grateful for them and the kindness they have shown me. To see this place go would be devastating, as it would be destroying 44 years of history.” The petition, which was started Monday, had more than 13,000 signatures as of Thursday afternoon.

Owners of the Ogden 6 Theatres announced Monday on Facebook that the theatre would likely have to close or relocate to make way for a Costco that is preparing to build at the Ogden Mall in the space that was formerly home to KMart. The news brought a flood of comments from longtime fans of Ogden 6 who shared their memories and lamented the impeding closure.

The petition, which aims to “bring attention to Costco, the Ogden mall management, and Classic Cinemas,” also encouraged signers to share their own personal memories about the theatre and “how the demolition impacts you.”

One signer wrote, “We all (me, friends&neighbors) reacted viscerally to the news of Ogden 6’s closure. It’s a landmark to us…”

Another added, “This theater is such an important part of Naperville culture. Such memories of this place.”

This is the longest-running theater in Naperville since the Naper Theater in downtown Naperville, which closed shortly after this theater opened in 1976. Hope this theater can relocate elsewhere in Naperville, or somehow be incorporated into Costco’s plans for the site. It’s a low-priced, friendly, comfortable theater that’s nearby and a nice alternative to paying sky-high prices at larger and more modern area theaters.

“A decision was made to shutter the theatre permanently without future movie screenings and announced in June of 2020.”

I think this will be the fate of many cinemas within the next 12 months.

That’s unfortunate, it was quite a clean operation and one of the last remaining AMC builds from that era.