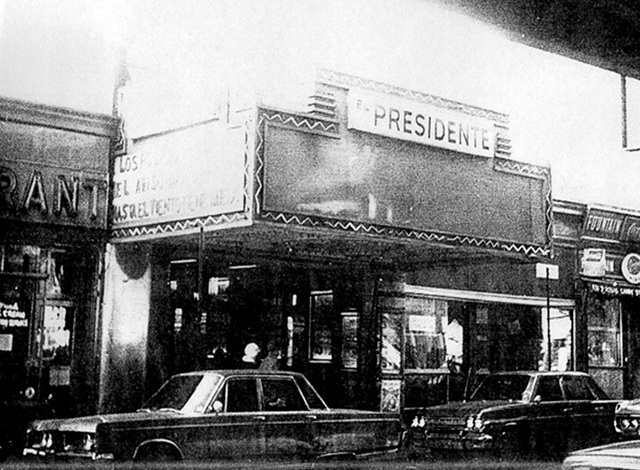 This seems to me to be the theater I remember as “El Presidente” under the El and around corner from the more elegant Prospect Theater. These were the weekend entertainment staples for the local Latino community, showing Spanish language films, mostly from Mexico. Between the Mexican wrestler / horror schlock films at the Prospect and the very first wave of imported Hong Kong kung-fu flicks at the President (when it switched to English-language, dubbed or otherwise) in the 70s (I saw Five Fingers of Death at the President, as well as all the Bruce Lee movies as they were first released) I received a very Quentin Tarantino-esque “education” in classic 70s exploitation genres! All this was balanced fairly well by trips uptown to the Loew’s Paradise and the RKO Fordham for more wholesome fare, and in retrospect I wouldn’t trade any of it. But if only I’d grown up to exploit the exploitation era as successfully as Tarantino and Robert Rodriguez have!

What was unique about this theater was it’s very primitiveness. No balcony, and I distinctly remember seeing a crisscross of wooden beams high above in the gloom. I remember wondering why it didn’t have all the architectural detailing the other theaters had. While the Paradise was a palace, this was the other end of the scale, like a big barn, which was kind of interesting in its own way.

I’m wondering if anyone remembers the Prospect Restaurant next to the movie theater in the 60s.

I’m searching for a movie which I thought played by the name of “La Mujer muerta”? Need some feedback pls. Cano

The first Grindhouse movie I saw at this movie theater was TNT Jackson back in ‘74 at the age of four with my mom and one of her boyfriends. Later after that, I kept going there with my uncle until it closed in 1979.