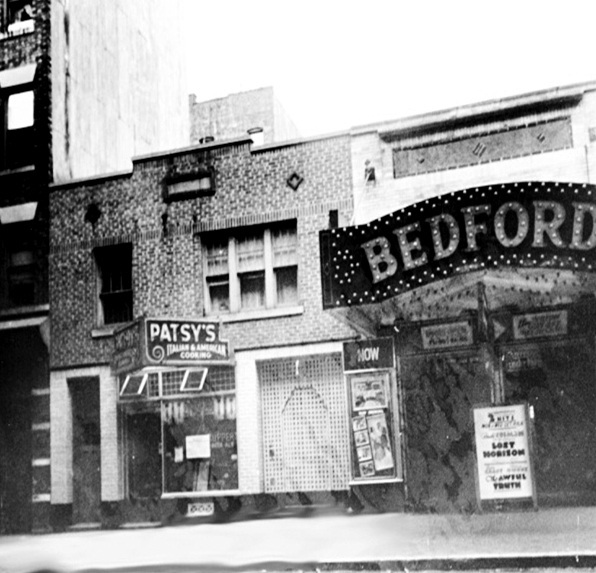 One of the smaller theatres located in the Bronx boro of New York. The Bedford Theatre was opened in 1923.

If you compare this photo from Google maps to the June 30 view, you can see that the building on the left in both shots still exists. However, the theater on the right has been replaced by a newer building. The theater has been demolished.
http://tinyurl.com/67j5gt

I saw “Jaws” at the Bedford in 1975. I remember walking across Bronx Park to the “other side of the tracks” and up Bedford Park Blvd. That was the only time I was ever there. I was an “Allerton Theater” kid….LOL

Reaper640, you did not see Jaws at the Bedford on Webster in 1975. It closed in the late 40’s or early 50’s and was converted into a department store (Hoeigs)in the early 60’s. I grew up next to the shuttered theater and used to think it was haunted when I was a kid! There was another movie theater around the corner on 204th street, that may have been where you saw Jaws!

An item in the January 21, 1922, issue of Real Estate Record and Builders' Guide says that architects Moore & Landsiedel were preparing plans for a 100x100-foot brick theater and store building for a site on the west side of Webster Avenue about 100 feet north of 204th Street. The project would be ready for bids about February 20.

duaneg7872- The other movie theater in the neighborhood was not exactly around the corner from the Bedford. It was the Mosholu(later Bainbridge), on the south side of 204th Street, about four blocks west of Webster Ave. I enjoyed movies in both, especially at the Mosholu once a year when the 52nd Police Precinct arranged for kids to watch movies for free.