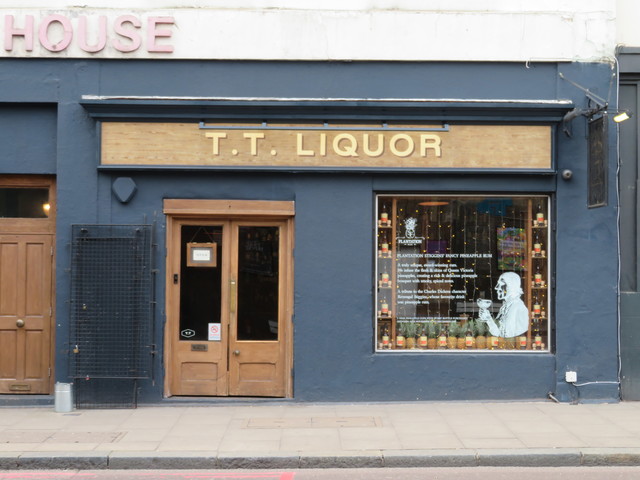 In the London district of Shoreditch, Alastair Tatton and Stephen Thompson opened TT Liquor on 25th February 2017 in historic premises that had been a police station in the 19th century. The expertly stocked store boasts over 1,000 liquors and, behind the street-front off-licence, a range of flexible spaces, over several floors.

One area is set up for cocktail-making classes, there is also a large dining room and the deceptively large Cellar Bar. Old holding cells have been converted into atmospheric alcoves, and exposed brick and low ceilings complete the ‘speakeasy’ feel.

Then there is TT Cinema, which, since at least early-2019, has played host to a wide variety of events in addition to the film shows. Projection is from DVD/Blu-ray, so this is not a first-run cinema. Instead, films are shown in seasons or in conjunction with sponsors (I attended a showing of the original 1980 “The Shining” on 19th November 2019 which was presented in association with Plantation Rum - on the somewhat tenuous basis that the word “REDRUM” (also read it backwards!) features in the film! - which provided complimentary cocktails to accompany the screening).

The truly vintage cinema seats, sourced from an internet supplier, certainly complement the ‘vintage’ atmosphere of this fascinating addition to the capital’s film scene.