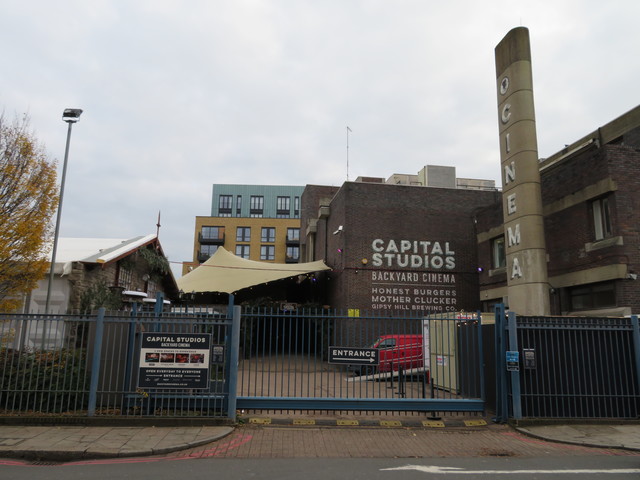 In the 1960’s and 1970’s cinematographer Keith Ewart was much in demand directing many famous commercials - with a young Ridley Scott often working as his art director. Eventually, he decided to construct a small studio centre, and Ewart Studios (with two main spaces, Studio A and Studio B) opened in the south London district of Wandsworth in 1968.

The studios really came into their own from 1982, when Channel 4 began and independent producers used them for shows such as “Vic Reeves' Big Night Out” and Jonathan Ross' early shows, including “The Last Resort”. However, in 1983 Limehouse Studios opened in Docklands. The smaller studio there was a very similar in size to Studio A, and so was in direct competition. Then, in early-1989, the government allowed ITV companies to sell ‘spare’ time in their studios to independent production companies. Now facing even stiffer competition, Ewart decided to sell the studios, and they were acquired by the Capital Radio group. (Tragically, Keith Ewart died of a brain tumour in July 1989.)

Renamed Capital Studios, they attracted sufficient work to remain in business even when, from the early-1990s, competition increased when the BBC’s studios were also marketed to independents. However, in 1997, Capital Radio sold them off and they became a completely independent facility, albeit retaining the Capital name.

Difficulties persisted, however, and the studios closed in October 2008. The site was ear-marked for redevelopment, along with the adjacent historic Ram Brewery, which had been operated by Young’s until closure in 2006.

Surprisingly, in March 2010, the studios gained a new lease of life, when Iranian TV company Marjan Television Network took over, for their Manoto 1 channel. But then, when the scheme to redevelop the whole site, with a mix of shops, restaurants, bars and apartments, was approved in July 2013, Marjan decided to move out. Having acquired Wimbledon Studios (which had gone into administration) they relocated in October 2014. That really should have sealed Capital Studios’ fate, with the plan being to demolish them in favour of a 36-storey triangular block of flats.

That was due for completion in 2018 but, although the Ram Quarter development on the brewery site went ahead, the redevelopment of the Studios faltered.

Then, in the summer of 2019, Backyard Cinema (which originated in 2012 in founder and creative director Dominic Davies’ back garden and quickly became a successful, roaming, pop-up cinema with a reputation for offering some of the best themed seasons of films in London) announced that they had discovered these boarded-up, ‘forgotten’, studios. After signing a five year lease, and undertaking a considerable refurbishment, they opened them on 13th September 2019 as the first permanent home for their immersive cinema experiences.

I visited on Tuesday 26th November 2019 for a screening of perennial Christmas favourite “Die Hard”, starring Bruce Willis, in their larger (230-seat) auditorium. The seasonal theme was ‘Winter Night Garden’, which clearly took its cue from children’s favourite “The Lion, The Witch and the Wardrobe”. Having checked in at the box office we were ushered, in small groups, into a period-dressed room, from which we departed through a wardrobe, between clothes hanging up, and into a mythical forest-tunnel. This led to a small space overseen by a witch (the White Witch?). She asked one of us to turn a key – and we were plunged into darkness! Turning the key the other way restored the lights, and, when the witch turned another key, the wall split open and we were in the auditorium. That was dressed as a mythical, crumbling palace, bedecked with vines and other foliage (Narnia?). It was all very well done – and, if all this doesn’t sound quite right for an 18-rated film, bear in mind that most shows this season were aimed at rather younger patrons!

The seats are unusual, being advertised as bean bags, but fortunately rather more comfortable than that sounds! There are two classes: Premium (in the centre, with head rests) and Stalls. Seats are unallocated at ticket purchase but, no doubt to encourage early arrival, ushers greet patrons and allocate them seats on a ‘first come, first served’ basis.

Fifteen minutes before the film, Pearl & Dean advertisements were followed by a vintage US drive-in concessions advert (“Let’s All Go to the Lobby”), Bing Crosby and Frank Sinatra singing ‘White Christmas’ (from their 1957 US TV special) and an interesting short detailing Backyard Cinema’s evolution and how the Studios had been refurbished. Then, the witch appeared, went through some mumbo-jumbo (accompanied by ‘snow’ falling in front of the screen, and some pyrotechnics - very effective) and exited, right on cue, at 8.30pm, the advertised film time.

Meanwhile, the second, smaller (approximately 50-seat) auditorium is reached through ‘Dr Portelli’s Antiques and Curiosities Shop’, a separate building off The Yard. This was presenting ‘Christmas in the Snow Kingdom’, in which patrons have to find the ‘secret entrance’ into the auditorium while, en route, crossing the “magical ball pit river” (actually full of small plastic balls!).

This is a fascinating addition to London’s film scene. As almost all the shows, in both auditoriums, are sold out for the festive period it would appear that Backyard have hit on a successful formula.