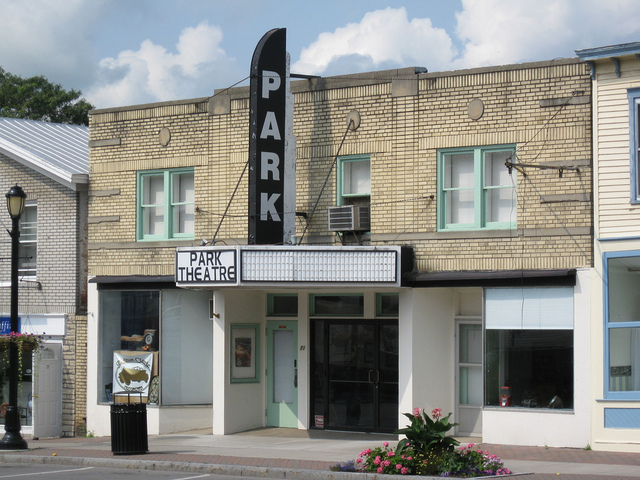 Located in the heart of the village of Avon, NY. The Park Theatre opened with great fanfare on July 20, 1938. It replaced the ‘first’ 250-seat Park Theatre built in 1912 across the street (which has its own page on Cinema Treasures). The Park Theatre originally had over 400-seats and would show 6-8 different movies per week. Open every day of the week, there would be 2-3 movies on Sunday & Monday, another two movies on Tuesday thru Thursday and another 2-3 movies Friday & Saturday. The movies were an escape from the drudgery of everyday life during the Depression and World War II.

In 1946, Kallet Theatres signed a 15 years lease and took over the management of the Park Theatre. Being part of a chain, it was much easier to obtain first run movies. By 1960, small town, single screen movie theatres were often abandoned as television had become a mainstay in people’s homes. The daughter of the original owner sold the building to the Avon VFW. The VFW intended to use the building as their meeting hall, but the community begged them to keep it as a movie theatre. The VFW reopened the theatre in 1965, and ran it for the next 30 years. Two other owners tried to run it from 1996 until 2003, when it was sold. The owner used the building for storage. In July of 2018, 80 years after the ‘new’ Park Theatre opened, it was sold yet again.

The new owner has renovated the theatre to a more multi-use layout. Now renamed Avon Park Theater, the plan is to show independent and classic movies, with a concession selling some more unique, upscale offerings. The theatre will also be rented for parties, private screenings and corporate events. Following a ‘soft’ reopening in April 2022 a grand reopening is planned for the summer of 2022.

The Petition was closed online. An effort to gain signatures locally on paper is underway. A recent walk through has been done by Ann. She also has met with a county representative who works on Main street revitalization.

Thats great news, please keep me posted, and let me know if I can assist in any way!

The Park Theater in Avon has a new owner and vision. The Theater celebrates it’s 80th birthday on 7/30/18. It’s opening day was celebrated with a parade in the village in1938. The theater was one of the first in the Rochester area to have Air Conditioning. A Main St and restore NY grants have been secured. Restoration will begin soon.

Welcome to CT. I think whoever added this theatre wrote the historical piece. Not sure if it can be or should be changed though you certainly can add current information in your posts going forward.

I just added pictures of marquee with neon restoration.

I passed by the theatre shortly after it was sold to the current owner. A small sign inside said will re-open as a multi venue site including movies. I again though about buying this theatre for a second time but the owner at that time asking price was to high. Although the theatre was used for car storage he had not leveled the floor and had retained all the seats.

I just uploaded pictures of the restoration. I also requested that the status be changed to “Restoring”. The theater will hopefully re-open this summer.

I just uploaded a recent photo of the front of the theater. Can this be used for the main photo?? Thanks!!

Please please please…. change the cover photo for the theater. A lot of hard work went into making the facade beautiful again. To those that are unhappy that part of the floor was leveled out, I would ask you to consider that it has been made more accessible to EVERYONE. The seats that were in the theater when purchased in 2018 were NOT original to the theater, and some have been restored and look much nicer now!