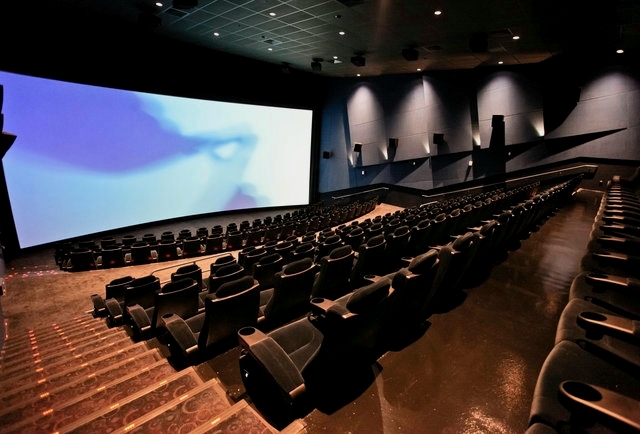 Located in the Hub on Causeway shopping center near North Station. The ArcLight Cinemas were opened on November 25, 2019. One of the auditoriums is equipped with 70mm projection. The cinema features a 65-seat bar which serves cocktails and craft beers.

It was closed on March 17, 2020 due to the Covid-19 pandemic. It was announced on April 13, 2021 that the closure would be permanent in all ArcLight/Pacific theatres. It was announced in December 2022 that AMC would be reopening the theatre.

The new ArcLight cinema is located in a new building directly in front of the newer version of North Station which originally was right on Causeway Street for decades and now is located in back, to the north. The cinema is on the footprint of the original station, and its arena above. (The new arena is above the new station, to the rear.) I believe that this is ArcLight’s first cinema in the Boston area.

The two brands operated more than 300 screens in California, including the coveted Cinerama Dome in Hollywood. In a blow for California moviegoers — and those in Los Angeles in particular — the ArcLight Cinemas and Pacific Theatres are closing all of their locations for good after seeing their business decimated by the pandemic.

ArcLight’s stable includes the prized Cinerama Dome in Hollywood. The Dome, built in 1963, is the crown jewel of the small theater complex constructed in more recent years.

ArcLight Hollywood is a bastion for both first-run movies and independent titles and, at one time, was one of the first L.A. cinemas to offer high-end food. It has also been a favorite site place to stage premieres of indie titles, and is beloved by many cinephiles.

ArcLight’s locations in Hollywood and elsewhere, including Sherman Oaks, are operated by Pacific Theatres. The Pacific side of the aisle includes such popular locations as the Grove in West Hollywood.

“This was not the outcome anyone wanted, but despite a huge effort that exhausted all potential options, the company does not have a viable way forward,” said a statement issued by Pacific Theatres, which is owned by the Decurion Corporation.

No ArcLight or Pacific location has reopened since the pandemic began. On Monday afternoon, word quickly spread across Hollywood that they will remain dark for good.

It wasn’t immediately clear who the pool of potential buyers might include for the more high-profile locations, should they be up for sale, such as the ArcLight Hollywood complex.

Last year, Netflix closed a deal to operate the Egyptian, another landmark Hollywood theater that’s not far from the Cinerama Dome. Among the mega chains, Cinemark only has two L.A. locations (one in Baldwin Hills and the other in Playa Vista).

“To all the Pacific and ArcLight employees who have devoted their professional lives to making our theaters the very best places in the world to see movies: we are grateful for your service and your dedication to our customers,” the statement continued. “It has been an honor and a pleasure to serve you.”

The National Association of Theatre Owners has warned all along that smaller and regional independent chains, such as Pacific and ArcLight, might never recover from the COVID-19 crisis.

“To our guests and members of the film industry who have made going to the movies such a magical experience over the years: our deepest thanks,” read the statement issued by Pacific Theaters. “It has been an honor and a pleasure to serve you.”

Has anyone heard of anything regarding the ultimate fate of this brand new complex? Any chance another chain will step in and purchase it?

AMC is reopening it. Will they ruin it? I hope not.

Ron Newman We have one AMC here in Asheville NC that was a former Carmike Theater. I haven’t been there in years because the GM is a witch. Looked into tickets for last Saturday because it was closer for where I was that day. There prices are $3.00 higher than Regal and Cinemark and our three local chains. Didn’t happen

@mikeoaklandpark That theatre was completely remodeled right before the pandemic. Heated leather recliners, full bar, delivery to theatre food. So definitely makes sense, and also - more than likely the GM that was there years ago probably isn’t there.

AsegruB Are you talking about The AMC River Hills Asheville? When they reopened after the pandemic she was still the GM