The Cinema at Selfridges (Official) 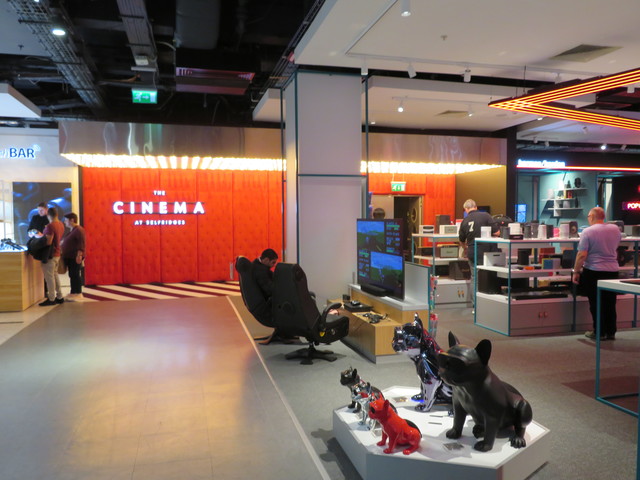 Located on Oxford Street, central London’s premier shopping thoroughfare, Selfridges Department Store was opened by Harry Gordon Selfridge on 15th March 1909. Although the main focus has always been its department store customers, it has never been afraid to diversify, and recent (December 2019) attractions include Le Tram Champagne Bar by Verve Clicquot (housed in a reconstructed street tram) and a winter rooftop terrace in conjunction with whisky label Johnnie Walker (for which a ‘Bothy’, a shelter used in remote areas of Scotland, has been recreated).

Selfridges has even played host to a cinema, albeit the Everyman at Selfridges only operated from September 2014 to April 2015 (see separate Cinema Treasures entry).

But then, on Friday 22nd November 2019, the cinema experience was tried again, when The Cinema at Selfridges opened.

I understand that an executive at the store, who has a connection with the Olympic Cinema at Barnes (see separate Cinema Treasures entry), came up with the idea, and the new cinema is a joint venture between the store and Olympic Studios.

It is located on the Lower Ground floor (appropriately, by the audio/visual sales area!) and accessed from within the store and from Duke Street, on the east side of the store, which facilitates access when the store is closed.

There are three screens. Screen 1 has 70 seats and Screen 2 has 59 seats, while the third (with 28 seats), designated as “Members' Screening Room”, is used primarily for members' screenings.

As might be expected, the auditoriums are very well appointed, with reclining seats, each with individual tables. In a lovely touch, they have screen tabs.