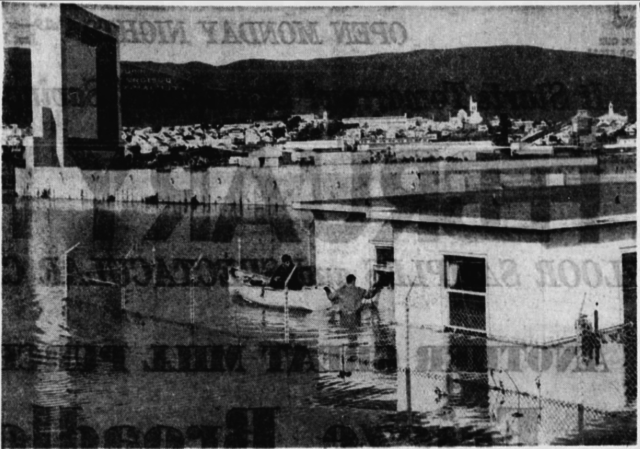 The Starlite Drive-In of South San Francisco opened on August 19, 1948 with Bud Abbott & Lou Costello in “The Wistful Widow of Wagon Gap”. It first appeared in the Film Daily Year Book’s lists in the 1949 edition.

On February 2, 1952, Boxoffice wrote, “John Van Arkel, manager of the Starlite Drive-In at South San Francisco, woke one morning last week to the sound of his dog scratching on the bedroom door. Arkel noticed a foot of water in his room. The runoff from a heavy downpour had flooded the Starlite Drive-In with five feet of water. His home, also on theatre property, was flooded. The drive-in was closed indefinitely”.

The 1952 Theatre Catalog listed the Starlite Drive-In at 32 S. Linden, which places it next to Colma Creek. The entry had the Starlite’s owner as David Bolton and its capacity as “800 - closed”. It was gone in the next edition of the Catalog, and a 1956 aerial photo of the site showed no trace of the drive-in.

Boxoffice, Dec. 13, 1952: “A flood at the Starlight Drive-In in South San Francisco a year ago has resulted in three suits, totaling $241,000, against South San Francisco. The suits were filed in superior court at Redwood City by the Starlight Theatre Corp., the Trans-California Theatres and Joseph Van Arkel, manager of the theatre. The complaint also named as defendant Arthur W. Baum, a contractor. It accused Baum and South San Francisco of negligence in cutting into the banks of Colma creek thus weakening them. Mud, silt and debris washed over the theatre property, forcing Van Arkle and his wife to evacuate their apartment by rowboat last January 26.”

Boxoffice, Aug. 21, 1948: “Tentative plans call for the opening of the new Starlite Drive-In in South San Francisco in the middle of September. The new ozoner will be located on a 13-acre site at 32 Linden Ave., and will have a 650-car capacity, according to San Francisco Drive-In Theatres Corp., owners. Principals of the firm are Rex Stevenson, Dave Bolton, Thornton Howell and James B. Howell jr.”

An article by historian Darold Fredricks in the Feb. 14, 2011 issue of the San Mateo Daily Journal added more details. “In 1948, the San Francisco Theater Corp. struck upon the idea of providing outdoor movies and immediately obtained 14 acres of flat land along the present Spruce Avenue, south of South Canal Street. Joseph Van Arkel was hired as a resident manager and the Starlite Drive-in opened Aug. 19, 1948. The first movie was a comedy, Abbott and Costello in “The Wistful Widow of Wagon Gap.” The entrance was from Linden Avenue as Spruce and Canal streets were not developed at this time. … Facing southeast, this huge majestic screen was designed to broadcast the pictures to the 850 automobiles in semicircular rows facing west.”

Details on who owned the Starlite when it flooded, from The Exhibitor, Jan. 16, 1952: “Rex Stevenson, Trans-California, is a happy man. The city is putting a main thoroughfare (the future Spruce Ave.) from El Camino, Cal., right past the screen-tower marquee of the Starlight (sic) Drive-In, South San Francisco.” It added that Trans-California had closed this Starlight for the winter along with Belmont’s Starlight and the Mission Drive-In.

It would appear that the entrance to the drive-in was turned into South Canal Street. A 1956 aerial shows a large area next to S. Canal Street and S. Spruce Ave empty which is the probable location of the drive-in.

There’s also a Starlite St in the same location so I’d says its 100% the spot where it was.