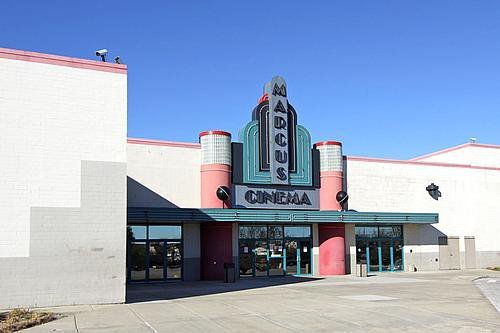 Opened as the Western-Lincoln Twin Cinemas in the early-1970’s. In the mid-1980’s it became a quad known as Western-Heights Cinemas. This theater was expanded to eight screens in the mid-1990’s. In 1998, its size was again increased, to fourteen screens. In 2000, the megaplex was taken over by the Marcus Theatres chain, and renamed the Marcus Chicago Heights Cinema. Each of the auditoriums features digital surround sound and stadium seating.

This cinema originally opened with two screens back in the early 1980’s.

We still go every week w/ their $5 saver coupon. Despite the location, this place is safe and friendly. It continues to amaze me how sweet the staff of teens working box office and concession are.

Marcus has done a fine job maintaining it as a first run. there’s alway some promotion or midnight movie going on. I think this is what keeps the place fun.
Normally I love to complain about Chicago Heights, this place is one of my few exceptions. As long as they keep it clean and safe, we will keep blowing $20 at the concession stand.

The cinema is located near Western Avenue and Lincoln Highway.

Opened as a twin. I think it was a Jerry Lewis. But definitely two screens with the typical JL setup which was a pair of Ballantynes running big reels with automated changeover. Later cut into 4 screens. They already had 4 projectors so just added platters.

As someone else said it was originally the Western-Lincoln. Later Western Heights.

Gene Buzzelli, are you out there?

Wasn’t there a Cineplex odeon in Chicago heights? Was this it?