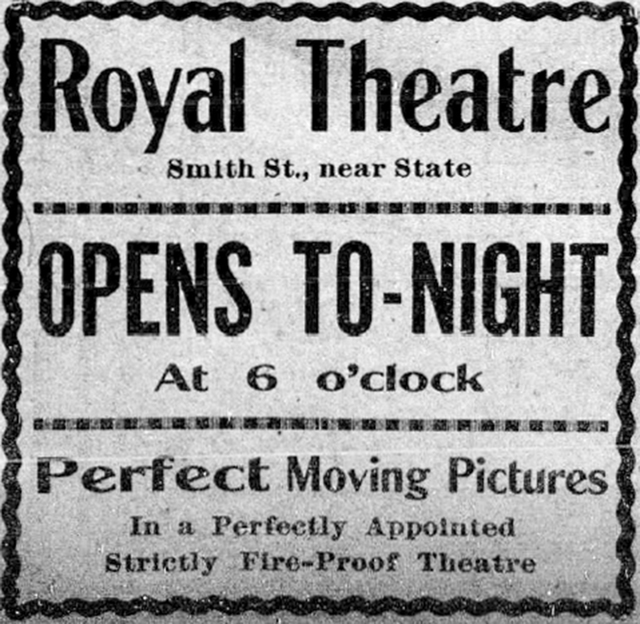 Located on Smith Street a few doors from the southwest corner of its intersection with State Street, the Royal Theatre opened on October 28, 1911. It was purpose built for showing films and leased by its builders to the Royal Amusement Company.

According to two articles in the Perth Amboy Evening News, the Royal Theatre was 30 feet wide and 144 feet deep, its entrance having a “very attractive tiled floor”. The auditorium ceiling averaged 20 feet from the floor which was sloped and made of “especially prepared and colored concrete”, there were 493 seats. Film was projected onto a Mirroroid screen, the projectionists enjoyed a roomy booth, 19 feet in width by 9 feet deep.

The Royal Theatre operated throughout the 1910’s under the same management. Regular programming stopped in the Spring of 1920. Paramount Pictures did use it as part of their “Paramount Week” promotion that September and there were other occasional mentions of music recitals and lectures in the local paper.

After several months of renovation, what used to be the Royal Theatre opened as a food department store in September, 1921. An article about its opening in the Evening News mentioned that the renovation had left “none of the appearances that would lead one to believe that it had once been a theatre”. The building still stands, currently home to a wireless retailer.

Not sure why this theatre isn’t visible on the map or showing any theatres within 30 miles, there are six listed on CT within 3 blocks. It is also not showing up as a nearby theatre on any of those pages. Hopefully this can be fixed? It seems other recently listed theatres are having the same problem.

I am curious if the closing of this theatre is the reason the Cresent eventually changed their name to Royal further up the street?

markp, there is a reason this theatre and the newer Royal located up the street shared a name.

The Royal Amusement Company which opened this theatre in 1911 consisted of two men, David Snaper and William Brown. In 1916 they became the initial operators of a new theatre two blocks further up Smith Street, originally called the City Theatre. Snaper closed the City in early 1918 (most likely the closing days of 1917), by that time Smith had departed. I’ll write more about what happened to the City Theatre on its page, it eventually became the Royal most are familiar with and you worked at.

Snaper went on to build a small circuit of theatres, mostly in Middlesex County and Staten Island. After closing the Royal he disappeared from the Perth Amboy theatre scene until he acquired the Crescent in the early 1950’s and renamed it the Royal. The 1953 Film Daily Yearbook listed the Royal as one of the theatres in the Snaper Circuit.

walterk, my father who was a longtime projectionist in the area mentioned Snapper many times when I was a young boy. He basically ran theatres into the ground. He ran the Royal into the ground eventually selling it to Fernando Bravo who also took over the Fords Cinema. Snapper also ran the State in Woodbridge and the Forum in Metuchen. When S & S theatres saw the condition of the State and Forum (they owned the buildings), they immediately closed the State and moved all the projection and sound equipment to the Forum and remodeled it. They sold the Forum in 1983. My father did not have any kind words about Snapper.