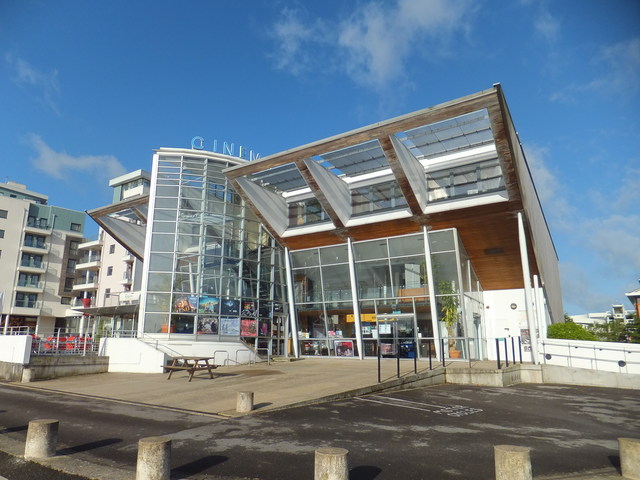 Overlooking the marina at Ocean Village this stunning glass fronted building is without doubt the most comfortable and stylish place to watch films in the Southampton area. It opened on 24th February 1995 with the Australian film “Muriel’s Wedding”

The glass fins on the front and the CINEMA rooftop sign are strongly reminiscent of the classic art deco cinemas of the thirties.

Seating capacities in the auditoriums are 325 and 141.

The City Council closed the Harbour Lights cinema suddenly in early 1999 and it stayed empty until taken over by Picturehouse Cinemas in September 1999.

Southampton has two other cinemas, the six screen UGC (almost next door to the Harbour Lights) which is a rather shabby looking late eighties multiplex, and the more recent Odeon 12 screen in the city centre.

Beautiful picture house and the most comfy at the time. I remember the early Polanski season from June 95 with Knife in Water. And another few indie classics like Clerks, Ed Wood and Amateur.

This cinema often appears in any list of “Ten Best Cinemas in England”. Indeed, as the photo shows, architecturally it is an impressive building with its glass façade and location overlooking the marina. It has a nice café inside and as the photo also shows you can also sit outside on the veranda and appreciate the surroundings.

However I think that a good cinema should primarily be judged on how it operates as a cinema rather than its architecture and surroundings.

On this score the verdict is more mixed.

Screen 1 is good; it is wide with a full Scope screen and movable side masking. It was refurbished a few back to a high standard with comfortable seats and plenty of leg room. The layout was changed removing the centre aisle and having sides instead; this was all good.

However on the down side, the auditorium is very light during the film as the lights are just dimmed and not turned off. It is far too light in my experience and detracts from one’s enjoyment. The management are aware of this and say that changing it is on their radar; however that is not that easy as the electrics are not wired to allow them turn the lights off over the seats but leave them on over the aisles. Additionally the fire exit cuts a corner out of the auditorium and makes the fire door with its lights very visible. Small points perhaps, but ones that stop Screen 1 from being an excellent place to watch movies in.

Screen 2 is not so good; it has bigger problems. The screen does not take up all the end wall as there is a passage down one side (fully lit) leading to the fire door. There is nothing subtle about its presence; it probably takes up about a quarter of the end wall and I found it very distracting. Consequentially the screen is only 1.85 which in 35mm days had top masking and in my opinion made the screen far too small for the size of the auditorium. I have stopped going to this screen so I don’t know if the top masking has been retained for digital projection; I presume not as is common practice nowadays.

Overall while the architects designed a building that looks great externally, I don’t think that they had much clue as to design cinema interiors that are great for the moviegoing experience. The current management do a fine job in successfully running a cinema that caters for all tastes but sadly they are rather hampered by the design of the building.