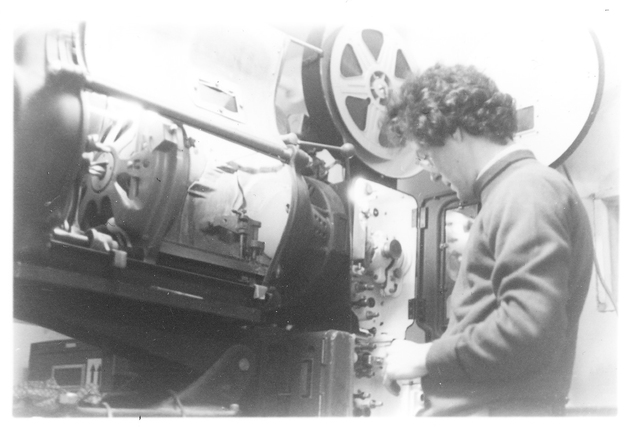 Wormwood’s Dog and Monkey Cinema was founded by Gordon Parsons and Ken Pittman with the first regular screening taking place March 19, 1976. The NFB Theatre was used for screenings in the early years. In 1983, after GAE moved The Turret out of that space, the first Wormwood’s full-time home was constructed on the 3rd floor of the building now known as The Khyber Arts Centre. The building had a health food store, The Bean Sprout, on the ground floor. With 93 seats Wormwood’s grew slowly, but building a solid following.

By 1987 Ken Pittman had returned to Newfoundland and Gordon realized it was time to move and began searching for a new location and business partner. Building owner Pangiotakas Brothers left him no choice but to vacate, as they would not offer a lease beyond month-to-month.

Peter Gaskin became Gordon’s new business partner and manager of the theatre and a new home was found at 2015 Gottingen Street in the old Carpenter’s Union Hall. Gordon stayed in touch with the daily occurrences at the theatre but spent much of his time working on other projects from his SSHRC grant to the Atlantic Film Festival. Peter ran the day to day operations of the theatre in its new location, which saw the theatre grow to 151 seats, a Crying Room, concessions stand, and Critic’s Choice Video.

There were plenty of ups and downs in that location as well as the previous spot on Barrington Street, with public protests of controversial films like “Hail Mary” and “The Last Temptation of Christ”, poor attendance for some screenings and general disasters from snow storms to neighbouring gas spills. But perhaps the most devastating blow to the theatre was the untimely death of Gordon in June, 1993. Shortly after Gordon’s passing, an unstable lease evolved with the bankruptcy of the owner of the Carpenter’s Hall, and Peter again began looking for a new location. What appeared to be a terrific opportunity in the old Vogue Theatre proved to be the undoing of the enterprise. With shrinking attendance, a costly, dysfunctional heating system and waning enthusiasm, Peter left the theatre in October, 1997 and it closed on February 26, 1998.

Pictured above, Wormwood’s co-founder, programmer and operator Gordon Parsons with carbon arc projector in the booth at the old Khyber Building location, in 1983.