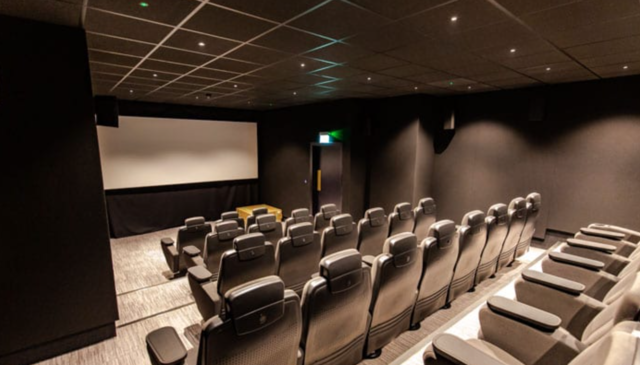 The 166-room aparthotel, which provides self-catering apartments as well as the usual hotel facilities, is operated by Native and occupies the top eight floors. The ground floor fitness centre is operated by BLOK; their first outside of London.

The cultural offering, Cultureplex, also on the ground floor, was created by leading London restaurateurs David Waddington and Pablo Flack (who opened their signature ‘Bistrotheque’ in London’s East End in 2004, also in a converted warehouse). The design, by their long-time collaborator Loren Daye, is intended to reflect the city’s “unique cultural tapestry”. “We’ve exposed and celebrated the building as much as possible”, said David Waddington, “Quarry tile, steel, timber and warm illumination have been layered to soften and divide the space”.

Alongside the 80-seat Bistrotheque is Klatch (a coffee counter), a lounge/bar, meeting rooms and events spaces – and a bijou ‘mini-cinema’.

Equipped with 4k projection and digital sound, the cinema opened on Thursday 26th September 2019. One of its first presentations was the World Premiere of music documentary “Hitsville: The Story of Motown”.

Initially the three businesses ran independently, but then, on 13th February 2020, it was announced that David Waddington and Pablo Flack had moved out, and Cultureplex had been acquired by Native.

The Bistrotheque was subsequently re-branded as The Restaurant at Cultureplex. The cinema’s operation was unaffected. Then from 4th July 2020, Cultureplex and The Restaurant were rebranded as Ducie Street Warehouse, while the Klatch coffe bar became known as The Counter.

The cinema, badged as Mini Cini, was once again unaffected. However, when I visited the city in October/November 2021, it was only advertising screenings on three nights a week -Monday was ‘Pawpcorn’, Tuesday was ‘Romance and Drinks’ and Thursday was ‘Cult Classics’ - plus ‘Very Mini Cini’ on Saturdays for youngsters. I attended the ‘Pawpcorn’ screening of “Hachi:A Dogs Tale”, starring Richard Gere on Monday 1st November 2021 to experience the novelty of a ‘dog-friendly cinema, and was slightly disappointed that the only other patrons were a young couple with a Pomeranian dog-which I am pleased to say was very well behaved!

Rather worryingly, a few days later, I noticed that only the ‘Pawpcorn’ strand was operating screenings. So perhaps the future of the Mini Cini is in some doubt.