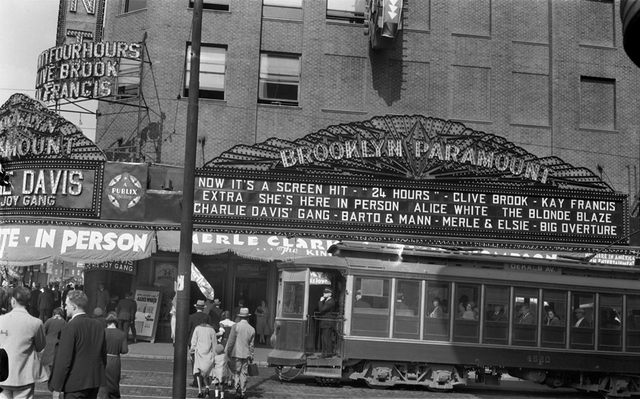 Built in 1928, by the studio that bore its name, the Brooklyn Paramount Theatre was opened on November 24, 1928 with Nancy Carroll in “Manhattan Cocktail” (a silent film with sound effects). On stage was Paul Ash’s Band, Maria Gambarelli and Eddie Cantor in “That Certain Feeling”, a ten act stage revue featuring violinist David Rubinoff, and the entire show was directed by John Murray Anderson. The twin consoles of the Wurlitzer 4 Manual 26 Ranks organ were opened by organists Henry Murtagh and George A. Johnson. The Brooklyn Paramount Theatre is a magnificent 4,201 seat movie palace, which opened only three months after the huge 4,088-seat Fox Theatre almost directly across Flatbush Avenue Extension. In hindsight, the Paramount Theatre was initially never a successful theatre as it had to compete with other nearby theatres:Metropolitan Theatre (3,580 seats), Albee Theatre (3,246 seats), Fox Theatre (4,088 seats) and Strand Theatre (2,894 seats) all within a few minutes walk away, perhaps the Brooklyn Paramount Theatre was one theatre too many? By April 1933 it was closed for 4 months and it was closed again from May 1934 until the Fall of that year, when it reopened with a movies only policy.

The main bulk of the auditorium is hidden from view on Flatbush Avenue Extension by the rather stark looking 10-story office block, which gives the building a 1950’s look rather than the style of architecture that was being built in the late-1920’s. A huge sky-sign was originally mounted on the top of the building and there were two huge vertical blade signs above each side of the small corner entrance which had a marquee. The Brooklyn Paramount Theatre is considered to be one of the most flamboyant of all the theatres designed by the architectural firm Rapp & Rapp of Chicago and Edwin C.A. Bullock working out of the firms' New York office. The large lobby, though grand and spacious, is rather plain compared to the auditorium treatment. Here on the side-walls of the auditorium are large bays and alcoves decorated with columns and urns with a plain wall behind. Originally a projected image was shown through these bays giving the audience a vision of looking through the arches onto formal gardens of French royal palaces in the 18th Century. The ceiling is a painted blue dome to represent the sky, under which is hung a perforated trellis. The entire auditorium treatment is in a French Baroque Atmospheric style. Seating was provided for 2,018 in the orchestra, 434 in the mezzanine and 1,749 in the balcony.

Many stars have appeared on its stage, including:Buddy Rogers, Eddie Cantor, George Jessel, Mae West and Rudy Vallee. In later years business did pick up until the downturn began due to the increasing popularity of Television. It became popular in the 1950’s and one could say even famous for the Rock ‘n Roll shows staged by Alan Freed where Fats Domino, Little Richard and Jerry Lee Lewis had the audiences dancing in the aisles. A sparse audience of only 300 came along to see the final film “Hatari!” starring John Wayne on August 28, 1962.

The Long Island University had already purchased the building in 1950 and converted the office block into their Brooklyn Campus. Upon the Paramount Theatre’s closure in 1962 they took over the theatre section of the building and removed the two giant blade signs and sky sign on the roof. The marquee was also removed and the vestibule entrance on the corner has been filled in and a new entrance inserted. The main lobby of the theatre served as a student canteen, and the spacious lounges beneath were used as conference rooms and offices.

In the auditorium the orchestra floor has been levelled to provide the facility with a basket-ball court, and the mezzanine level and loge seats were removed. The rear of the huge balcony has been converted into offices. Harsh spotlights now illuminate the auditorium instead of the original subtle concealed and projected lighting which gave the auditorium its illusion of grandeur. The Wurlitzer organ has one console which is still in working order and over the years has been maintained. It is normally hidden away beneath the basket-ball court, still located in the old orchestra pit on its elevator. Many argue that the instrument is one of the finest in the country, if not the World!

On January 29, 2015 it was announced that Barclays Center affiliate Brooklyn Sports and Entertainment had formed an alliance with Long Island University to reopen the Brooklyn Paramount Theatre as an entertainment venue, which will host music, comedy and boxing events in the auditorium which will have a capacity for 3,000 in orchestra & mezzanine levels. Renovation/restoration work began November 1, 2018, but due to money restraints, it won’t be a full restoration similar to which the Loew’s Kings Theatre received in 2015. Here at the Paramount, the huge balcony will be left untouched, but if the theatre does well after its reopening, then there may be plans to renovate that area also. It was planned to reopened in August-2019.

Thanks CC! Great news and photos….One question that I don’t understand is how the Paramount & a restored Uptown in Chicago plan to remove the main floor seats for some shows for standing room and putting them back for others. These must be a new light weight chair that can be moved easily. Plus the storage room. I wonder how long it will take to remove them & store them and put them back?

The new date to start construction is November 1st. If they start then the construction supervisor states that they should be done around August 2019. Meanwhile, my crew and I will keep the organ in shape for the opening.

Just a update. So far, construction has NOT started.

Someone on the Kings thread said LIU pulled out. What’s the story?

Pulled out of using the spot. Who owns it and what if anything are the plans for its future use ?

Since LIU owns the location, I guess it is Barclays that pulled out.

Will it ever go forward even if and when the pandemic ends ?

Photographs of 130 Brooklyn theatres, most of them from municipal tax files and already displayed individually at Cinema Treasures, can be found in the resource linked here

Any news on this house?