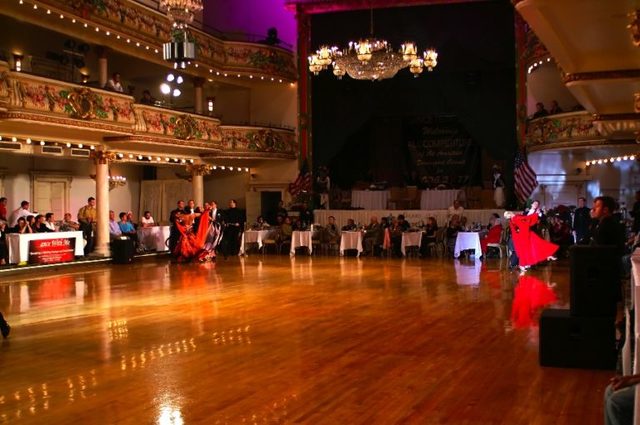 Located in the Park Slope neighborhood of Brooklyn. This is a rare surviving example of a multi-purpose built entertainment center that was a feature of many districts in large cities and served as privately operated civic amenity buildings in small towns all over America in the late-19th Century. Here would be held political rallies, dances and social events.

The original Prospect Hall on the site was built in 1892, but burnt to the ground in 1900. The owner John Kolle ordered the rebuilding to take place and architect Ulrich J. Huberty designed a larger building on the site designed in a Modern French Renaissance style. It was opened on February 3, 1903. Its main room, the Grand Ballroom is reached from a large entrance hall up a grand staircase and it is located on the first floor. As its name implies, it has a flat floor suitable for dancing. There are two balconies with side slips which extend to the proscenium. When set up for use as a seated auditorium, it can accommodate 1,700-seats. As well as dances and balls being held in the Grand Ballroom, it was also used to stage vaudeville shows and screen motion pictures. Opera star Enrico Caruso appeared here and in 1910 Sophie Tucker graced the stage.

There are numerous other rooms in the building that originally contained a rifle range, a bowling alley, a public bar and other smaller rooms that could be hired out. In 1910 the Idle Hour Motion Picture Theatre was opened to the left-hand side of the main building. This operated until 1913 when Kolle converted the gardens at the right-hand side of the building into an airdome and named it the Prospect Hall Venetian Garden, which presented ‘high class motion pictures and vaudeville’ every evening during summer months. The Grand Ballroom was used to present plays from 1936 until 1940.

By this time the ravages of overuse and lack of maintainance were beginning to take their toll on the building and Kolle sold it to the White Eagle Hall Co. who did some refurbishment and converted it into a Polish community center. This use lasted into the late-1960’s when, to pay for repairs, they began to sell off fixtures and fittings and occasional boxing matches were its only use. By 1981 the building had been boarded up and abandoned.

Then, in stepped local realtor and travel agent Michale (Michael) Halkias and his wife Alice, who, upon viewing the by then derelict building, fell in love with it, and have spent over 20-years restoring it to an even greater splendour than it originally had. The building complex has a dining capacity of 5,925 and a total capacity for 8,000.

Renamed Grand Prospect Hall it is used as a catering venue for weddings and other events and rooms can be hired out to suit all occasions. Concerts also taken place in the Grand Ballroom. It has even been the location of several film shoots and is featured in the John Houston film “Prizzi’s Honor” and in the Francis Ford Coppola production “The Cotton Club”.

The 82 year old owner/operator Michale (Michael) Halkias passed away on May 6, 2020, his death caused by Covid-19. The Grand Prospect Hall was sold in July 2021 to a developer, who immediately gutted the building internally in August 2021, with a view to demolish for redevelopment.

The Grand Prospect Hall is on the National Register of Historic Places - Landmark Status.

New owner has filed for permission to demolish the building. Community protests have followed, according to this news report

In November 2000 I organised a visit to New York City for the UK based Cinema Theatre Association, assisted by Brooklyn based Cezar Del Valle. The Grand Prospect Hall was one of 14 theatres on the 5-days itinerary and we were warmly greeted by Michale Halkias who had arranged a buffet lunch for the group of 56 CTA members. He will be sadly missed and would be appalled to see what has happened to his beautiful building.