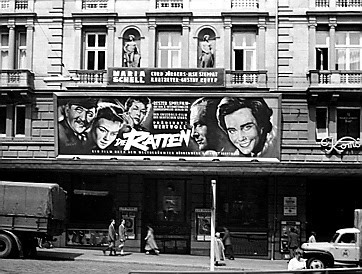 Located in the Stuttgart city centre district of Stuttgart-Mitte. The EM Filmtheater was opened as a single scrren cinema on 12th July 1950 as part of the luxurious Hotel Marquart. The seating was on orchestra and balcony levels. It was designed after the plans of Eugen Mertz. The colours of the auditorium were pink, white & green. The colour of the two curtains were one in green and the orher in silver. The foyer contained a ‘Wintergarden’ with living birds in it. The cinema is still in operation by EM Filmtheaterbetriebe GmbH.