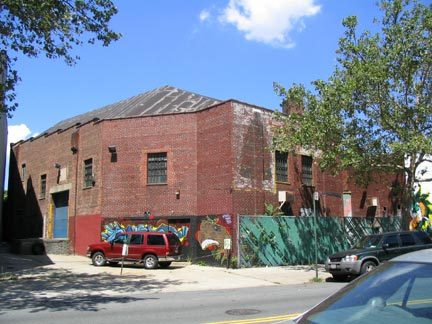 The 43rd Street Theatre was one of four movie houses that once operated concurrently in the Sunnyside, Queens, area. Built and operated by the Century Theaters circuit, it showed its double-feature programs a week after they’d played the Bliss Theatre and Sunnyside Theatre, which were also Century theatres.

The 43rd Street Theatre first opened in 1938 and survived until around 1950, its last few years under the management of the Springer circuit, which took over some of Century’s lesser theatres. The building still survives, currently with a Halal Chinese Restaurant occupying what was once the theatre’s entrance. The auditorium was totally gutted and serves as a warehouse for Nelson’s Christmas Decorations, which is the corner store in that retail block.

Although open only about three months of the year, Nelson’s also does business on the Internet and through a mail order catalog.

This should be the back of the theater building:
http://tinyurl.com/yeqo98x