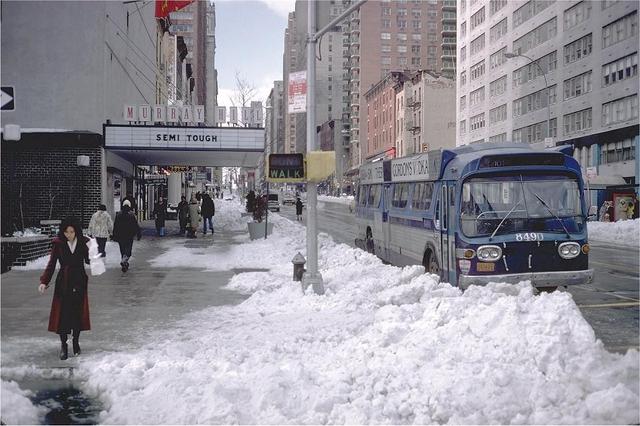 Originally opened as the Murray Hill Lyceum in 1893. In 1920 it was listed as the 34th Street Theatre with a seating capacity of 600. By 1926 it was operated by the Yost Theater Circuit. A Seeburg-Smith organ had been installed.

Later known as the Murray Hill Theatre, this was a moderately sized cinema that sort of mirrored the Sutton Theatre uptown and the former 34th Street East Theatre down the block. It was remodeled in 1959 in a ‘Moderne’ style to the plans of architect Benjamin Schlanger. This theatre was about to be renovated again when in 1986 while screening the film “Psycho III” the ceiling collapsed. Fortunately, no one was injured. The theatre was shut down and eventually demolished.

On December 21, 1990 it was rebuilt as a 1,200-seat quad with the same name but in the style of the City Cinemas 1-2-3 on 3rd Avenue and E. 59th Street. This, too, was short lived, as Loew’s Kips Bay 14 opened up in 1999. Two years later as business diminished for this and the Loew’s 34th Street Showplace down the street, they felt no need to continue operating. The theatre was closed on July 18, 2002 and was demolished to make way for a high-rise apartment.

I remember my father used to work as a manger there back in the mid 1970’s. I remember seeing many films there including the movie Rollercoaster. I liked how the Murrary Hill had there outer doors painted to match the film they were showing at the time. Does anyone remeber my father who worked there in the mid 70’s and was the manager?

According to “The Encyclopedia of the American Theatre Organ” by David L. Junchen, pg. 630, the “34th Street Th.” in New York, New York, had a Seeburg-Smith organ installed in 1920.

This organ had a Simplex blower, serial #I134, which was 2 horsepower and delivered 10" of static wind pressure.

The organ’s size (# of manuals/# of ranks) is not given in the book (was not known at time of publication), but from what little I’ve learned about Smith organs so far, the 2 horsepower blower would indicate probably around a 6 rank organ, maybe 5 or 7 ranks, but probably not any larger or smaller than that.

It is a shame to hear about all of the tragedy associated with this theatre, and then about its demolition (and the demolition of the more recent theatre built on the site), but that’s the way it goes sometimes I guess.

Does anybody know where this organ, or its parts, is/are today?

jackbauer24, do you know if there was a pipe organ or any organ parts in the theatre when your father was the manager?

Smeeglereegle, do you remember anything about an organ in this theatre during the time you worked there, or a story of where it went?

*The organ had a Kinetic blower, not a Simplex blower, sorry!

I saw no evidence of an organ as the building was being stripped to the four walls and roof in 1989 or 90. With the exception of the balcony structure and the concrete box that was the projection booth, everything else, including the closed restaurant, was down the first day.

Saw many, many films here in the ‘80s and '90s. At that time, most of the buildings in the area were still three-story tenements from the old days, but the writing was on the wall when they started tearing those down.

I only saw “Eight Men Out” here in 1988. Very good movie. The theater was okay. I only remember there wasn’t much leg room between the seats.

I saw ‘Rocky’ and ‘Star Wars’ here. And some ‘grown-up’ Woody Allen type feature when I was a kid. The entrance was simple. and led down to the theatre – with the concession stand kind of on the way in, with a view of the screen. I don’t know of any other theatre that has this feature. I miss it.

Frequented the MH during the 60s when it was operated by Rugoff/Cinema 5. It often day dated with the Trans-Lux East and a B'way house usually the Astor, for mainstream United Artist product. Did see Bombolle there, a 3-part Italian film of 3 vignettes by noted directors, common at the time.

City Cinemas reopened the theatre briefly as a single screen in 1987 before it was guttered to make it a quad.