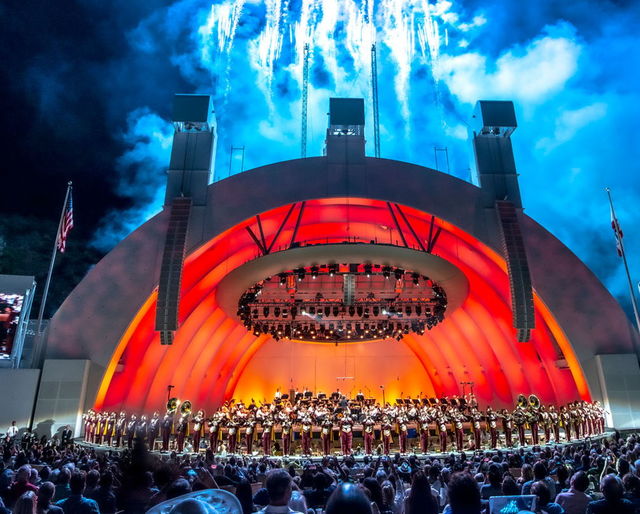 Opened on November 11, 1921. Officially opened on July 11, 1922 with Alfred Hertz conducting the Los Angeles Philharmonic Orchestra. Since its inception the Hollywood Bowl has had several band shells from the first being just a tented stage to a more substantial shell built in 1926 designed by well known Paradena based architect Myron Hunt. There were two designed in 1927 & 1928 by architect Lloyd Wright (son of Frank Lloyd Wright) and in 1929, a new shell was designed by architectural firm Elliot, Bowen & Walz. It was constructed using a mix of concrete and asbestos on a steel frame, which weighed in total 55 tons. The stage is 90ft wide and 60ft deep and the band shell is 45ft high at its center point. Over the years this has been modified due to changes required and improvements to acoustics and amplification. The 1929-built band shell was demolished in 2003 and a new one was constructed, opening in 2004.

In 1940 the 15ft high statue and fountain feature named the ‘Muse of Music’ was erected at the main entrance of the complex. It was designed by sculptor George Stanley, who was also the creator of the ‘Oscar’ statuette. In 1953 a decorative reflecting pool was installed in front of the stage. Measuring 160ft long, 36ft wide and 6ft deep, it contained 100,000 gallons of water, and in 1959 a fountain was added which gave colored light shows during intermissions. However, it was found that the water was detrimental to the Bowl’s acoustics and it was drained in 1972 and exclusive ‘Pool Boxes’ seating was installed in the space.

The Hollywood Bowl is the summer home to the Los Angeles Philharmonic Orchestra and concerts run for 11-weeks season from July to mid-September, but the Bowl is also in use throughout the year for other events and concerts. Over the years it has played host to some of the greatest names in music, covering everything from Classical, Opera, Jazz, Dance, Pop & Rock and it would be too long a list to even start naming them here.

The Hollywood Bowl has been used as a location for scenes in many films, including “A Star is Born” (1937), “Double Indemnity” (1944), “Anchors Away” (1945), “Monty Python Live at the Hollywood Bowl” (1982) and “Beaches” (1988). Films have also been screened at the Bowl on occasions, The American Cinematheque screened “Singin' in the Rain” and “The King and I” in 1990/1991 with vaudevillian prologues. From 2018 movies have also been screened with a live orchestra playing the score live.