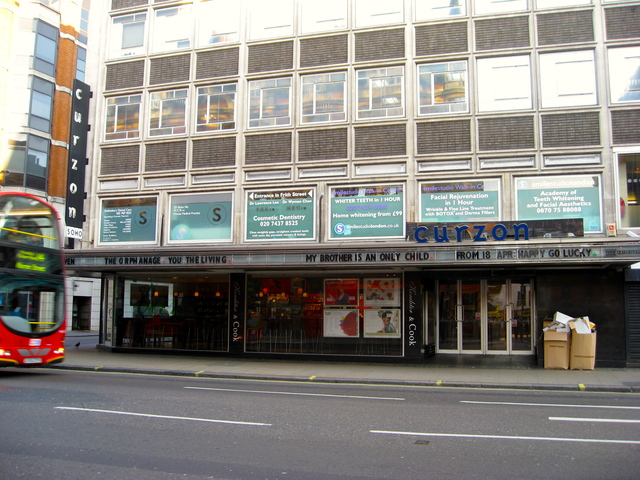 Built on the site of the Shaftesbury Pavilion/Gaumont News Theatre which was destroyed by German bombs during World War II (it has its own page on Cinema Treasures). This cinema on Shaftesbury Avenue at the corner of Frith Street in London’s West End opened on 4th February 1959 as the Columbia Cinema. It was leased to Columbia Pictures as an outlet for that studio’s films, although the opening film was “Gigi”- an MGM film, which played here for 7-months before transferring to the MGM-Loew’s Ritz Cinema on Leicester Square. It was followed by the Columbia film “Anatomy of a Murder”. Another big hit was Barbra Streisand in “Funny Girl”. James Mason in “Lolita” had a Gala Premiere here in 1962.

The Columbia Cinema was sunk into the basement of a large office block and had 734 seats, and a huge curved screen for 70mm and Todd-AO presentations. The auditorium seating was on a single floor and there were (strangely) supporting pillars - although these were down the sides of the auditorium and did not interfere with sightlines. There were two sets of curtains in front of the screen. At ground level and basement level there are very generous sized foyers. The British Premiere of “King Rat” was held at the Columbia Cinema on 1st December 1965. In June 1981 a Royal Charity Premiere of “The Competition” starring Richard Dreyfuss & Amy Irving was attended by Her Majesty the Queen and the Duke of Edinburgh.

Classic Cinemas chain took over the lease and after some improvements and the installation of Dolby stereo it reopened as the Classic Cinema on 19th August 1982 with “The Last American Virgin”. Classic/Cannon could not make the cinema pay, and it became the Premiere Cinema with an art-house policy in 1984, but this was short lived and it was closed for refurbishment on 29th November 1984. It was operated by Curzon who again renamed it Curzon West End when it re-opened on 8th March 1985. They made a big success of the cinema.

Eventually in 1998 it was deemed too large and closed on 11th June 1998 with “Live Flesh”. It was sub-divided into a three screen complex. This was expensively done, to the plans of architectural firm Panter Hudspith Architects and the resulting cinemas - screen 1 with 249 seats uses the original proscenium, with screen 2 (120 seats) and screen 3 (133 seats) side-by side in the rear of the former auditorium. It re-opened as the Curzon Soho on 16th October 1998. It remains a popular West End cinema and continues to present a wide choice of Independent films. The street entrance now also serves as a café, while the main foyer downstairs also serves as a licence bar.

In December 2014 it was announced that the building was under threat to be demolished for a new entrance for the planned Cross Rail 2 scheme and a campaign to save it was backed by actors Stephen Fry & Benedict Cumberbatch.

I worked as an usher there for a few months in the late eighties. The management used to run it along the lines of a theatre, and it was always a very highbrow crowd. The auditorum was all in blue, and the seats were extremely comfortable for the time. A shame to see it sliced and diced, though am not suprised. It was rarely very busy, though the new improved version seems to be doing a roaring trade in DVDs and carrot cake!

Another photo of the Curzon here:–

press ad from august 1982 when it reopened as the Classic Shaftsbury Ave, with slightly less classy programming than todays
http://www.flickr.com/photos/woody1969/5447698533/

The opening film here, Gigi, was not in 70mm. Gigi was in 35mm CinemaScope. The practice of blowing up 35mm to 70mm didn’t begin until 1963 and was initially applied only to Panavision films (that company having devised the process). The problem with doing a long roadshow run of a non-British film is that you would run into quota problems. When Gigi transferred to the Ritz it eventually had to come off because of quota and they actually advertised that that was why its run was ending.

I have a press photo of child star Ian MacLaine being presented to HRH Princess Margaret at the royal premiere of the Columbia Pictures release “The Boy and The Bridge” on July 22nd, 1959 at the Curzon. Was this the same Curzon that is featured on this page?

Exact opening date 4 February 1959. Renamed Premier in 1984 but closed for refurbishment 29 November 1984. Reopened as the Curzon West End 8 March 1985. It was announced in December 2014 the cinema was under threat from Crossrail 2 project and a campaign to save the cinema was started, backed by Benedict Cumberbatch and Stephen Fry. Two more premieres: the film “Lolita” had a Gala Premiere here in 1962 and “The Competition” had a Royal Charity Premiere here in June 1981 in the presence of Her Majesty the Queen and the Duke of Edinburgh.

I have read (in Estates Gazette) that the building has recently been sold and the new owners plan to refurbish the building. The article says they will take a ‘conservationist'approach, so looks like a good future for this cinema.