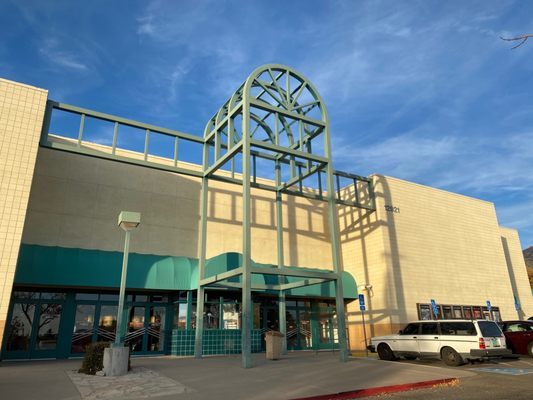 Built in 1989 by the landlord for Rand Theatres of Little Rock, AR. Due to financial difficulties, they never operated it. It was opened as an independent theatre High Ridge 8 on April 13, 1990. In the late-1990’s and early-2000’s, they played independent movies and with family movies and blockbusters. The Hinkle Family Fun Center opened next to the theatre and they decided to screen some family films to cater for the kids after playing at Hinkle. In 2013 they stopped playing family films due to a lack of audience and it went back to screening independent movies and sometimes blockbusters.

This theatre was announced in the summer of 1989 as A.O. “Tony” Rand was briskly trying to move to completion of Rand Theatres Circuit’s multiplexes in Tennessee, Texas, Illinois, Florida, and New Mexico. De La Torre-Reinhart was the architectural firm used. It was one of three Rand Theatres scheduled to open in the fourth quarter of 1989 in Albuquerque. Originally schedule to open December 15, 1989, the 1,833 seat facility was suspiciously devoid of concession stand(s) and projection equipment with one month to go to opening. And the news was not encouraging to moviegoers or the Rand Circuit.

Bad reports were circulating beginning with a lock-out of a cinema in Tennessee and that news spread to Texas with all locations locked for non-payment of everything ranging from lease payments, to utilities, to newspaper ads, to Hollywood studios for bookings, to sales tax revenue. This news traveled to the three New Mexico multiplexes just five days ahead of the Tramway’s grand opening on November 17, 1989 and a month before the Plaza del Norte and this location’s launch dates.

In about two weeks, the house of cards that was Rand Theatres Circuit tumbled as Rand’s Little Rock headquarters were locked along with the bedrock of the circuit’s theater locations in Arkansas. Finally, the Chicago and Florida locations appear to be the last of the Rand projects shut down with three ready to break ground and two in construction within Chicago-land and a completed facility in Palm Harbor, Florida which – like the High Ridge and its two cousins in Albuquerque – had no projection equipment or concession stands.

That gave the trivial distinction to High Ridge as the first of the three failed Rand theaters to launch. It was followed by Cinemark opening Movies West on December 14, 1990 and Hollywood Cinemas opening of Plaza at Paseo del Norte in May of 1991. Regal / UA carried its High Ridge into the decade of the 2020s.

And if you wondered what happened to the Rand family who ran the Rand Theatre Circuit, they went to jail for their theater scheme and learned their lesson by hatching a much more ambitious plan to bilk investors… but not in the film industry. This time they scammed oil and gas investors out of over $100 million landing them back in the pokey.