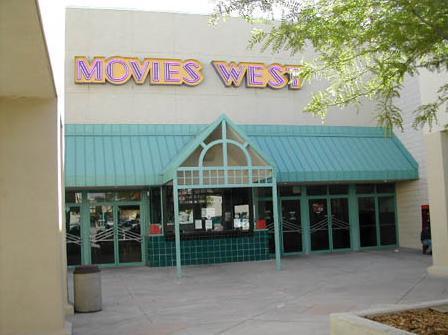 Cinemark Movies West 8 is a sub-run, discount theatre in the Plaza at Paseo del Norte Shopping Center on the city’s West-Side. The theatre also had been a first-run house for Cinemark preceded by Hollywood Cinemas and preceded almost by Rand Theatres Circuit of Arkansas.

The theatre was announced in the summer of 1989 as A.O. “Tony” Rand was briskly trying to move to completion of Rand Theatres Circuit’s multiplexes in Tennessee, Texas, Illinois and New Mexico. Rand was well aware that the projects had to keep going in order to get revenue in to pay mounting debts owed for unpaid utilities, shirked sales taxes, slow-paid newspaper advertisements, questionable box office totals provided to Hollywood distributors and shady equipment deals among is primary issues.

But the bad news which started with a lock-out of a cinema in Tennessee and that news spread to Texas with all locations locked. The news traveled to the three New Mexico multiplexes just five days ahead of the Tramway’s grand opening on November 17, 1989 and a month before the Plaza del Norte and Montgomery Plaza locations which were ostensibly completed but had not concession stands or film equipment. News then traveled in about two weeks to Rand’s Little Rock headquarters causing lock outs across the bedrock of the circuit’s locations in Arkansas as well as the operational headquarters, as well. The Chicago and Florida locations appear to be the last of the projects shut down with two in construction and three ready to break ground in Chicago-land and a completed empty shell in Palm Harbor, Florida.

United Artists took on the High Ridge on April 11, 1990 and Cinemark launched the failed Rand Montgomery Plaza 8 on December 14, 1990 as a discount house while . This third Rand, the Plaza del Norte location, remained without an operator until May 24 1991 when Jack Panzeca’s fledgling Hollywood Cinemas (not to be confused with Hollywood Theatres Circuit) took it and another former Rand Theatre in Lewisville, Texas to become the second and third location for the Dallas-based circuit. The opening films were “FX-2”, “Dances with Wolves”, “Thelma & Louise”, “What About Bob?”, “Class Action”, “Sleeping with the Enemy”, and “Silence of the Lambs”.

On July 24, 1992, Cinemark took on the location retaining the first-run policy although changing names to the Cinemark Movies West 8. Hollywood traded for the Ridglea Theatre in Fort Worth and only had the Hollywood Cinema 10 in its portfolio at that time. On January 10, 2003, Cinemark downgraded the location to discount, sub-run status as newer megaplexes including the Century Rio were challenging the older multiplexes. Cinemark took Movies West into the decade of the 2020’s. It was closed in March 2020 due to the Covid-19 Pandemic. It was announced in May 2020 it would be closed permanently.