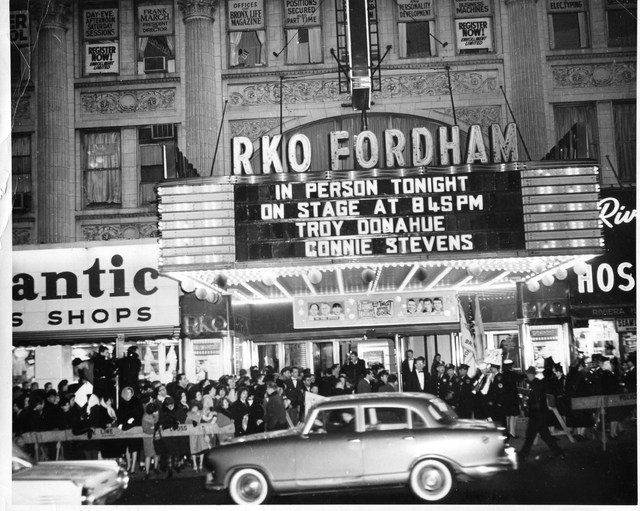 The Fordham Theatre was always considered one of the top Bronx theatres due to its location in the shopping hub around the Grand Concourse and Fordham Road. With William McElfatrick as architect, it was primarily designed for vaudeville and built by Keith-Albee. As Keith’s Fordham Theatre, it first opened on April 14, 1921, with six acts of “Best Keith Vaudeville” plus the feature movie, “Black Roses”.

In 1929, the Keith theatres were merged into the RKO circuit. In that year, the Fordham Theatre also got a major rival in the larger and more sumptuous Loew’s Paradise Theatre on the Grand Concourse. For several decades, the two theatres were the area leaders, although the Paradise Theatre had the advantage of showing movies that were exclusive for the Bronx. The RKO Fordham Theatre showed the same programs as six other Bronx RKO theatres, as well as some Skouras houses in areas without RKO outlets.

The Fordham Theatre survived into the era of mass distribution and was triplexed in 1976. A fourth screen was added in 1980, but a decline in the neighborhood’s business district finally forced the Fordham Theatre to close. It was demolished in March, 1987, and replaced by retail buildings.

Hey Pat, I am not on Facebook, but my wife is. Her name is Chrissy Schneberg. Not easy being part Italian with a last name like that! However, you can find my vocal group I sing with on Facebook: Neal Stuart and The Empire State. You can PM me through Chrissy’s page and I’ll get back to you. There’s a lot to catch up on. Hope to hear from you. Neal

The link only went to the main page. But I found and downloaded it, and added it to the Photos Section. 1951, photographer unknown.

Thank You DavidZornig & NittyRanks, it’s a great photo of a long gone era!

I started out as an usher with my friend Mike and moved up to assistant then Manager. Jack use to send me to other theaters as a relief Manager. I remember Soctty and Monte.

Hi Hoco, what’s your name? I was an usher then the Chief of Staff, then the Assistant Manager at the RKO in the 60’s with Jack.
Pat

Monty was a great guy…. Do you remember the cashiers, Martha, Sylvia, Libby, and Olivia? I loved them…

This theatre was extensively renovated by RKO Century Warner in 1984-

The RKO Fordham, the flagship of RKO Century Warner Theatres in the Bronx, has completed a $250,000 facelift to give it a bright and modern look.

In addition, the movie house has been fitted with the latest, state-of-the art projection equipment that brings it to the top level of the finest in New York City.

From a new marquee to the completely redesigned lobby, designer Lou Venza has aimed at giving the Fordham the kind of “today” look that complements the first-rate movie fare being offered by the theatre and the level of modernization and comfort which the circuit now demands of its theatres.

The Fordham marquee has been fitted with a new logo, new attraction panels and improved lighting to improve its visibility.

A new, illuminated light panel with neon lights makes it stand out along Fordham Road. New front doors have been installed and now lead into a lobby painted with vivid earth colors.

Modern tiles have been installed along the floor and parts of the wall where they have been integrated into an impressive new mural.

New refreshment stands have been constructed in the lobby and on the second level with a view to improving customer convenience, with the accent again on pleasing patrons and the utmost in product cleanliness, in the booth, Dolby stereo sound has been made part of the modernized projection system.

A new air-conditioning system has been installed to increase customer comfort.

Here is a working link for the opening credits of “The Wanderers” set in 1963, filmed in 1978. RKO Fordham Theatre at the head end. Previous link went dead. The films on the marquee were the same two at the Texas Theatre where Oswald was caught after the slaying of JFK. An event also noted in the film.