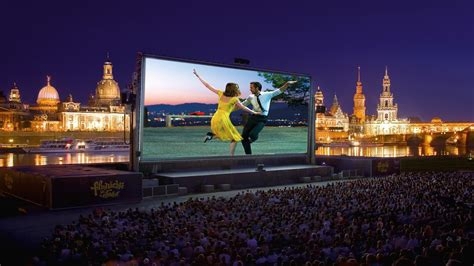 Located in the city centre in front of the River Elbe, with a view of the skyline of the historic city centre. The Filmnachte am Elbufer was opened in 1991. It is operated by PAN Veranstaltungslogistik & Kulturgastonomie GmbH. The size of the screen is 34x14 meters with a volume of 448 square meters. There is also a LED screen for daylight screenings with 16 square meters. It is a popular open-air cinema which presents feature films and live performances. Many top name artists have appeared here: James Brown, Gilbert Because, Backstreet Boys, Lou Reed, Chris de Burg, Bryan Adams, B.B. King, Nena & Simply Red.