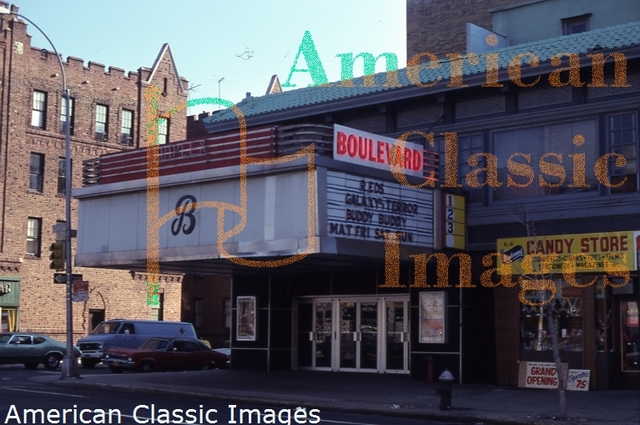 The Boulevard Theatre first opened in November, 1926, and was one of three theatres built in NW Queens by the Grob & Knobel circuit with Herbert J. Krapp as architect. The Boulevard Theatre in the Jackson Heights section of Queens, was the only one of the three with stage facilities large enough to handle a live play or musical. Unlike the other two, it also had a balcony; the Sunnyside Theatre had all of its seats on a steeply raked main floor, while the Jackson Theatre had a raised “stadium” section of seats at the rear of the auditorium.

The Boulevard Theatre was designed to be a playhouse, with bookings of shows that had recently closed on Broadway or were “trying out” enroute. The attractions ran from Monday through Saturday, with Sunday used for vaudeville and a feature movie.

In 1928, when William Fox acquired the Grob & Knobel theatres, he kept the Boulevard Theatre legit by sub-leasing it to Louis Werba, who also operated playhouses in Brooklyn, the Bronx and Upper Manhattan. The onset of the Depression sent both Fox and Werba into bankruptcy, so the Boulevard Theatre became a double-feature movie house under Fox’s successor, Skouras Theatres, which also took over the Jackson Theatre and Sunnyside Theatre (later sold to Century Theatres).

Due to its location in a residential area on Northern Boulevard that was a long walk from the 82nd Street shopping district around Roosevelt Avenue, the Boulevard Theatre never did as well as the Jackson Theatre, but it survived a triplexing in the early-1980’s before a decline in the neighborhood caused its closure. It sat vacant for at least a decade while a battle raged over the owner’s plan for demolition, which was opposed by the community.

The Boulevard Theatre was finally sold for conversion to what became the highly succesful Natives Restaurant-Theatre, catering to Queens' very large Hispanic community. The restaurant-bar took up the Boulevard’s former entrance and lobby, while the three auditoriums were used for plays, concerts, and sometimes imported movies. By 2016 it was a restaurant/nightclub. It was demolished in early-2021.

I can’t believe I just found this page. My family owned this theater in the 70’s and early 80’s until we sold to our partners. It broke our heart to watch the theater fall into disrepair and eventually close since some of our fondest memories happened there.

And Minooch is right, the triplexing happened in the early 80’s, not the 70’s, much to our chagrin. If it was viable, we would have just had one screen.

This theater had been closed for years. it is now a restaurant / nightclub. Please update

As I recall there was a gym or health club on the second floor in later years.

My mom took me here to see cheech and chong movies in the 80’s, as a little tyke….mommy whats the smell? I concur with fred1…yes it was later a nightclub…in the 90’s i frequented a heavy metal club across the street .

Perhaps G&G operated the Boulevard at the very end of its cinema connection, but for most of that history it was Fox/Skouras and possibly United Artists when that circuit name change took place.