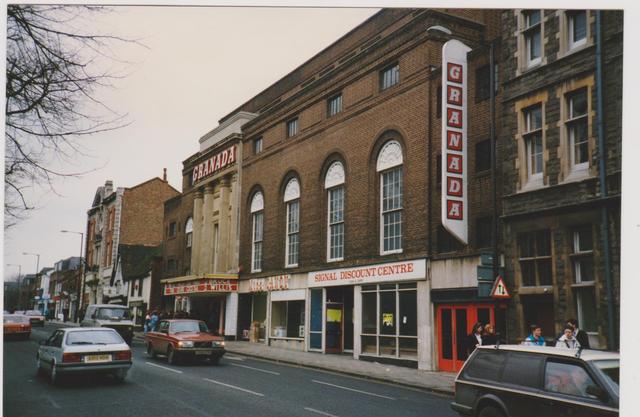 The beautiful Granada Theatre in Bedford was one of this chain’s ‘standard’ designs, very similar to others in Harrow, Slough, Welling, Greenford, North Cheam, East Ham, Shrewsbury and Maidstone. Only the latter two named preceded the Bedford building and only by a few months. The Granada Bedford was opened on 15th December 1934 with William Powell in “The Thin Man” and Laurel & Hardy in “The Private Lives of Oliver the Eighth”.

The interior decoration was by Theodore Komisarjevsky and consisted (in all the standard design Granada’s) of the Italian Renaissance style that he had so successfully deployed on the Phoenix Theatre in London. On either side of a rectangular screen opening were three roundheaded decorative metal grilles above a balustrade. The grilles were boxed in by two fluted pillasters which were very slightly smaller than those on either side of the proscenium. Above both grilles and stage was a frieze in the style of an old oil painting. The remaining walls were essentially plain but painted to look like stone blocks. The Granada Theatre’s were definately stylish and luxurious. The seating was divided between a 996 seat stalls and a 694 seat circle.

At Bedford a small stage was provided with a Wurlitzer 3Manual/8Ranks organ in the centre of the orchestra pit, which was opened by organist Harold Betts. The stage was only 17 feet deep but was still used on a regular basis for variety and pop concerts. The proscenium opening was 54 feet wide.

The main cinema was never sub-divided, instead a second screen opened in 1974 in the former (large) resturant. It seated 209.

When a multiplex was propsed for the town Granada threw in the towel and sold the cinema to a development company who leased it back to them until the site was needed. In 1989 all the remaining Granada cinemas, including the short time left on the Bedford Granada lease to Cannon Cinemas who renamed all of them Cannon. However the Bedford Cannon cinema closed the following year and was swiftly demolished.

I fondly remember going there several times when I lived near Bedford in the 1970s. The main auditorium was impressive in it’s size and decor – one of my favourite memories was seeing 70mm presentations there – really satisfying!

A series of photographs taken in 1988 here:–

I have weird and wonderful memories of the Bedford Granada Cinema from when I was growing up in Bedford in the 80’s. I distinctly remember seeing Rocky IV, Halloween and Cocktail as a ten year old. Wonderful atmosphere, timeless architecture and always a couple on the back row making out. Loads of fights, also I remember they had the smartly dressed ladies patrolling the aisles before showtime with the little torches showing you to your seat and selling ices and pop. Smoked first Marlboro red in the darkness and always remember the thrill of sneaking into an “X” rated film. Then they knocked it down.Was anyone informed?An absolute disgrace.ChrisParsons

Vintage photographs of the Granada, and its Wurlitzer organ console:
http://www.ukwurlitzer.co.cc/2186.html

Very sad that this place got knocked down. Brilliant cinema and a favourite place of mine.

A few negatives recently rediscovered (mis-filed) has yielded some new digitally enhanced scans of the interior of this cinema:–

All taken shortly before closure.

Given that this cinema was renamed Cannon for only a few months, could it not perhaps go under its “proper” name on CT?

Thanks Ian for the interior pictures. What a beautiful place, and a crying shame it’s gone. Bedford council should hang their heads in shame.