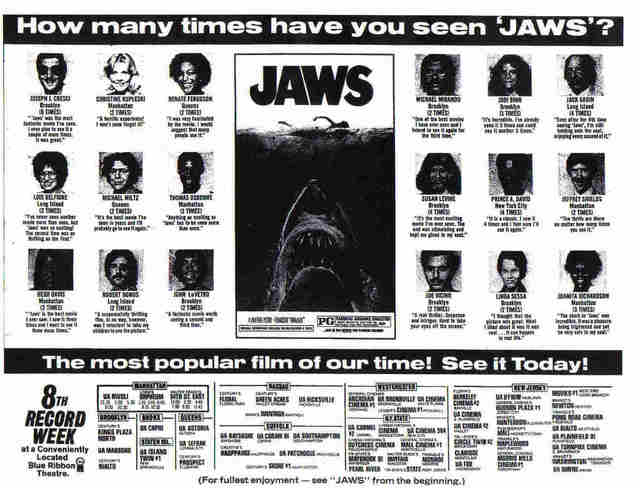 It was closed on August 13, 1987 with Matthew Modine in “Full Metal Jacket” & Elisabeth Shue in “Adventures In Babysitting”. It was the Staten Island home of “Rocky Horror” after Fox Plaza dropped the film.

I remember when the theater ran “Jaws”; the way the theater handled the crowds was very poor. The theater was just reopened after twinning, but “Jaws” ran in only one part; the other half was dark. I waited over two hours to get in, and barely got a seat. It turned out that the film was oversold; blocks of tickets were counted as one seat, and some people had to stand. The second half of the theater was reserved for some festival of Disney flicks they ran a few summers in the mid-1970’s. I had no kids back then, and I considered that a waste of space.

That picture brings back memories. I saw “E.T.” on a preview at the Island a few days before the flick opened; the main feature was “Dead Men Don’t Wear Plaid.” That was possibly my last trip to the Island. When I was working on Staten Island and wanted to see a movie when I was done, I’d truck off to the Amboy Cinemas in Jersey, as they had matinees year round. Something that didn’t start on Staten Island until the UA theater opened in ‘87. That whole shopping center is changing. The K-Mart Auto Center near the theater is long closed, and now, the K-Mart store, that has been there since the early 1970s, is closing. The early buzz was that the K-Mart would be torn down and a Target would be built. The K-Mart will probably be gone by this Thanksgiving; the “Store Closing” sign is up. I haven’t heard any recent news about what’s coming in, though.

The K-Mart closed in January 2012. It’s now torn down; it’s supposed to be replaced by a Target. The tire center is supposed to be replaced by a restaurant. In fact, the whole shopping center is supposed to be re-done and improved. Unfortunately, no new movie theater is coming in. I saw “Rocky Horror” at the Island back in ‘78 or ‘79. Once. I wasn’t too enamored by the film, possibly because I had to stand throughout. That made the experience a bit uncomfortable for me. I also saw “The Other Side of Midnight” at the Island in the summer of 1977. For a buck. (Remember the Wednesday matinees at the Staten Island theaters that cost a dollar?) I probably caught one of the worst colds I ever got from that screening.

Does anyone recall if this is the twin theater in staten island that showed Mary Poppins back in the Mid 1970’s??? I also remember the chaos of when Jaws was at this theater and yes it was a nightmare but what an exciting movie to see when you are a kid.

also I believe I saw Snow White and the seven dwarfs at this theater in the mid 70’s.

To Jimmyhank – Yes, I’m sure you did see “Mary Poppins”, “Snow White” and other Disney flicks during the summers in the mid-‘70’s at the Island. I noted in my post above that the Island ran the Disney festival. I think that 1975 was the first year, and that continued for three or four straight summers.