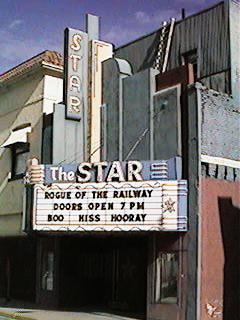 The Illustrious Onion Skin Players say that the Star Theater was built around 1917 by A.C. Gordon as the Wheaton Theatre, a vaudevillian house that later added silent movies. In 1939, Bruce Gordon gave it a $40,000 an Art Deco style remodeling, which still can be seen today on its recently repainted exterior and marquee.

Since 1997 it has been home to the Illustrious Onion Skin Players, formed in 1985, who have returned it to its roots. The Players purchased the 600-seat Star Theater in 2001 and have been kept busy restoring the building. The 400 downstairs vintage seats are being reupholstered and patrons are invited to become a chair holder with their name on a plaque. The balcony, which used to seat about 200, is used now for lighting equipment and there are many other structural changes that have been helped by donations from the community. The Weiser Signal American says that as their budget allows the players plan on other modern amenities such as handicapped accessible restrooms and they may be open to the use of the Star for films and other performing groups.

During the first three full weekends in March the Players put on a 1890’s style melodrama that draws its actors from the open auditions held in December. These musical melodramas portray the history and individuals of Weiser and the Treasure Valley. Each ticket holder is promised “A humorous, fast-paced evening of a melodrama, sing-a-longs and songs from the late 1800’s through the 1940’s”.

The Star Theater was added to the National Register of Historic Places in 1999.

Recent photos (“X” out of the print menu):

Here is another photo:
http://tinyurl.com/yd267qw

The web site GenDisasters provides this page quoting a May 21, 1937, Ogden Standard Examiner item about the fire.

A 1916 issue of the Music Trade Review has this entry for Idaho in a list of theaters recently opened: “C. Matt Sears has just opened the Wheaton Theatre, a new moving picture house, at Weiser.”

GenWeb has this photo of the Wheaton Theatre. It does not bear much resemblance to the Star Theatre building seen in the recent photos.

A classified ad in Motion Picture Times of August 4, 1928, offered for sale a Wurlitzer K organ at $7,500 dollars. The ad was placed by A.C. Gordon. I wonder if that could have been the organ from the earlier Star Theatre?

If the Star was not the same house as the Wheaton Theatre, it reopens the question of when the Star was built. If it was opened by 1921, it could have been the Star that had the organ installed that year.

I came across a 1909 reference to a lecture held at the Wheaton Theatre, so the 1916 Music Trade Review announcement I cited must have marked its conversion into a movie theater. Judging from the photo I linked to, it looks like the Wheaton might have been a second-floor theater. Unfortunately I’ve been unable to find it listed in any edition of the Cahn guide.

I finally found the Wheaton listed in the 1914 Cahn guide, and it was indeed a second-floor house. Cahn listed it as having 567 seats.

The Onion Skin Players, current occupants of the Star Theatre, have a web site.

It has been proven that the Star and the Wheaton were different theaters, though the Wheaton operated under the name Star Theatre for a few years before this house was opened. This Star Theatre, Weiser’s third of the name, must also be the one that got the Wurlitzer organ that is discussed on this PSTOS page.

A 1991 NRHP documentation form about theaters in Idaho attributes the design of the 1917 Star Theatre to Salt Lake City architect Frank Moore.