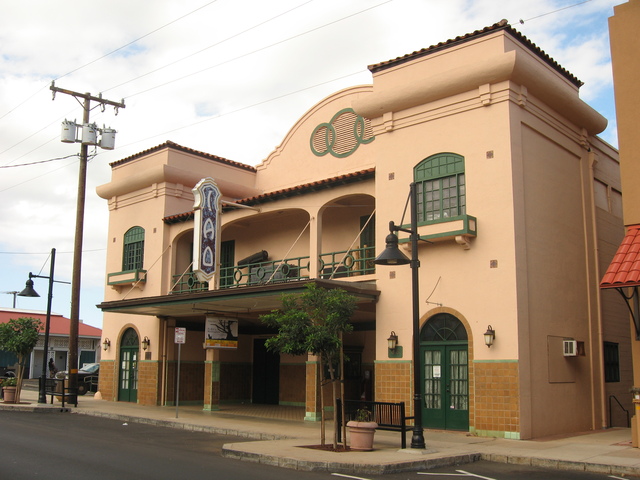 Opened in 1928, and built in Spanish Mission style, this theater was once the main entertainment venue of the city of Wailuku, on Maui. Besides screening movies, it featured live stage acts, and such stars as Bob Hope and Frank Sinatra made appearances at the ‘Iao. In 1953, the theater hosted the Hawaiian premiere of “From Here to Eternity”.

By the early 1980’s, however, the theater was in decline, and after it closed, was seriously threatened with demolition. However, it was saved, and in 1995-96, underwent a million dollar-plus renovation.

It is now home to the Maui Onstage live theater group, which has ever since been struggling to continue the ‘Iao’s restoration and to just keep it remaining in operation.

I was in Hawaii on R & R in July 1969 I went to the movie and saw The Aoril Fools could this be the theater?
rebegail

Here is another photo:
http://tinyurl.com/35zgd6

At rental info, the website has 3 photos including auditorium facing stage.

I’d like to correct the comment above that the Iao was "patterned after the Princess Theatre in Honolulu." There is actually no similarity between the two apart from the fact that both were "stadium style" houses. I spent a great deal of time in the Princess in the '60s with the organ (which we removed just shortly before the theatre was demolished in 1969 and reinstalled in the Hawaii Theatre two blocks away) and also wrote a history of the Princess. The theatre that WAS patterned after the Princess is the PALACE in Hilo, which in fact was designed by the two surviving architects of the Princess, Davis and Fishbourne. It is nearly identical in plan and very similar in decor, only on a much smaller scale. (The Princess was the 2nd largest theatre in Hawaii at 1650 seats.) There were actually five theatres in Wailuku at one time, and many more on the rest of the island in the 20s and 30s. TheIao is the only one left; it’s great that it survived!

Aloha Iao Theatre fans,
The historic Iao will celebrate its' 80th anniversary this March, 2009. I will update you all on the events planned for the grand dame of Maui…
Stephanie Ohigashi
PS. Please tell David…thanks.