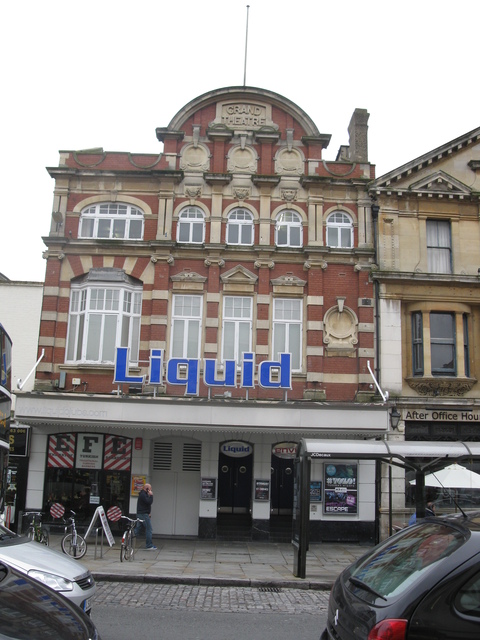 The Grand Theatre opened as a live theatre in 1905 when it was also known as the Grand Palace of Varieties. The architect was J.W. Start.

The auditorium is high, containing two curved balconies, the dress circle has nine rows of seats and the Gallery ten rows. The original capacity would have been around the 1,400 mark (but fully seated as opposed to benches in the top level between 900 and 1,000 were accommodated). There are four boxes on either side of the stage with arched opening and bow fronted plasterwork.

The stage was 36 feet deep and has a square decorated proscenium arch surmounted by an extraordinary plaster cartouche in the shape of a huge shell with reclining female figures at the head (immediately above the stage).

Films were part of the entertainment from the start here, but around 1920 the theatre was acquired by Biocolour Picture Theatres chain and was run full time as a cinema. Biocolour were themselves acquired as the nucleus of the Gaumont British Theatres circuit in November 1926 and Hippodrome Theatre was run by Gaumont as their main cinema in the town (they also owned the Empire Theatre which was closed in 1959).

Eventually passing to the Rank Organisation, the Hippodrome Theatre was closed by them in 1961 and converted to a Top Rank Bingo Club that lasted for 24 years. It was then used briefly as retail space before becoming a disco, in 2015 operating as Liquid & Envy. Almost all of the plasterwork survives and the Hippodrome Theatre is a splendid example of an Edwardian theatre.

An auditorium photograph of the Hippodrome Theatre, Colchester in its current use as a nightclub:
View link