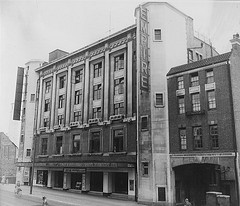 Opened as the Empire Theatre on 22nd December 1928 with a production of a new musical “Winona”. It was built for the Moss Empires Theatres chain (their last new theatre) and was designed by W. & T. R. Milburn. The auditorium is on three levels and bears strong similarity to the Milburn’s other theatres of the period (Festival Theatre, Edinburgh and Dominion Theatre, London). The proscenium arch is high and curved with a deep tympanum above. The stage is very generous (13.5 mtrs wide 12 mtrs deeps plus good wing space) and equipped to modern standards. There are twenty dressing rooms.

The theatre seats 2,289 (plus room for 130 standing) and in addition to the two balconies has seating in a pair of boxes on either side, much more in the American style than British. The ceiling is divided into square and rectangular panels with a dome over the front stalls area. The foyers are as opulent as the auditorium, being in the style of an ocean liner, lined with marble and having very grand staircases connecting all the levels.

A projection room was part of the original design and it had been wired for sound by 1934, but remained largely unused for the first fifteen years of the Empire’s life, but in 1946 it was acquired by Gaumont-British Cinemas, and from 1948 it was renamed Gaumont Theatre, when films became the chief fare although the stage was still often used.

It was given a Grade II Listed building status in 1981, but the huge auditorium became increasing uneconomic for films and the then owners; the Rank Organisation, applied several times for a bingo license. This was refused, as there were already several bingo outlets in the city and the Council wished to retain the theatre facility. Relations between the Council and Rank became rather acrimonious at times with the owners threatening to simply close the building. Eventually Rank pulled out and the Gaumont was sold to the Council who instigated a thorough renovation to the (by now) rather shabby theatre.

It re-opened as the Mayflower Theatre and has been a notable success ever since. It houses touring shows, including the long running musicals which can stay up to four months here, opera, ballet and large scale drama. It has just received a second upgrade and is undoubtedly one of the UK’s leading provincial theatres.

A 1971 exterior photograph of the Gaumont/Mayflower, Southampton here:
View link

Photos of the Mayflower here:–

You simply have to go to The Mayflower Theatre website and go to the two sections:
1: History of The Mayflower
2: Memories of The Mayflower
They have to be the most interesting and well set up sites of the history of a theatre available. Its covered in photos, stories and all in great detail. Great stories of its life as a theatre then a cinema and now back to theatre again -one of the best in the United Kingdom! Well worth a visit for a good hour or so’s reading- enjoy!

Currently closed undergoing refurbisbment. Not sure as to the extent of the renovation but it has been closed for quite a number of weeks.