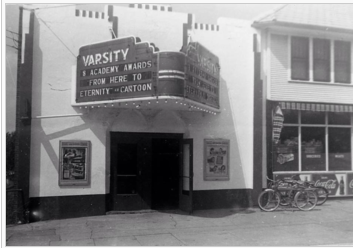 Described as a neighborhood house when it opened, the theater was originally named the Iowa Theater whose address was given as 1115 W. 14th Street. Constructed at a cost of $12,000, it was owned by Ray E. Duttle.

At 100 feet long and 24 feet wide, the theater offered 324 upholstered seats. Spanish Colonial style architecture was carried out both inside and outside the building. The concrete floor sloped from the lobby to the stage with a total drop of 7 feet. The owner planned to operate the theater seven nights a week, two shows a night with matinees on Saturdays and Sundays. (1)

By February, 1943 when it was called the Varsity Theater, the theater was open Friday Saturday and Sunday only. (2)

If that address is correct, current use is laundromat.