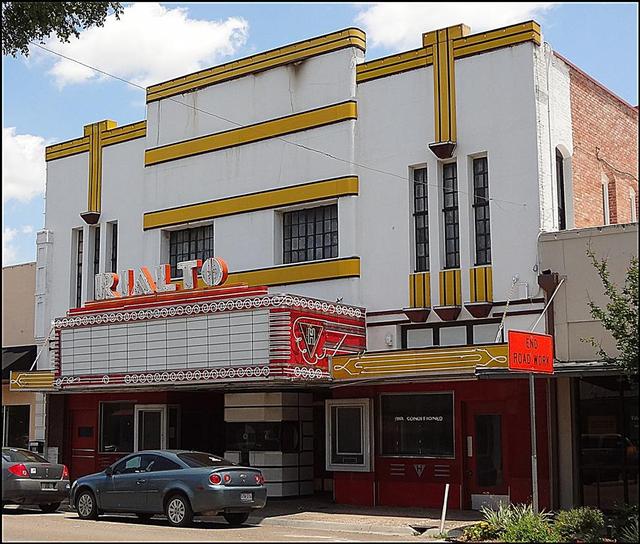 The Rialto Theatre was opened by Hall Industries Theaters on August 19, 1922 with Douglas Fairbanks in “The Three Musketeers”. Seating was provided for 542. The architect was John Eberson. The theatre had a small balcony seating 102 with the balance on the main floor. The Rialto Theatre was gutted by a fire in early-1936.

It was rebuilt in an Art Deco style and the brightest feature of the theatre was the tons of neon on the marquee. The theatre closed in 1986 and is being renovated. It was scheduled to reopen sometime early in 2004, however, this date was not met and now Fall of 2009 is planned.

This theatre has a red Vitrolite exterior. The work was done by Tim Dunn, Vitrolite specialist located in St. Louis MO.

The September 15, 1972, issue of Boxoffice featured an article about the 50th anniversary of the Rialto. The house opened on August 19, 1922, over a month after it had been completed. The delay was the result of a railroad strike which had stranded the Theater’s organ in a Cincinnati railyard. Henry Hall finally grew impatient and arranged for a ten-piece orchestra to substitute for the missing theater organ at the opening. The first movie shown in the new house was Douglas Fairbanks' “The Three Musketeers.”

The Boxoffice article gives a higher seat count at the time of the Rialto’s opening than the theater currently has, saying there were 526 opera chairs on the main floor and 200 additional seats in the balcony. Over 1300 tickets were sold for two shows on the opening night, at 10 and 25 cents.

The year after the Rialto opened, the Halls bought a competing Beeville house, the Mission Theatre, later renaming it the Rex. They operated the Rex until 1959. When the Rialto was gutted by fire in 1936, the Halls opened another theater called the Rio, intending it to be a temporary replacement until the Rialto was rebuilt, but Hall was still operating the Rio at least as late as 1972.

Joe: Thanks for your historical information! Interesting to note that Eberson AND another man designed this one.

Here is a close-up photo of the Rialto’s entrance. The movie advertised is “Captain Blood,” which was released in December, 1935, but a smaller market such as Beeville would probably not have gotten the movie until some weeks later, so the photo was probably taken in 1936, about the time the house reopened. This might even have been the first movie shown in the newly remodeled house.

I would like to open it again. I think it’s perfect. I would show not new movies and it would be a double feature for five dollars. Once a month I would try to bring back old hits like Jaws, so the new generation could see them like we did. What do you think?

loranne: If you have a dream, go for it!

The Rialto no longer has its stand-alone web site, but now has this Facebook page (which, oddly, still sports a link to the now-unrelated web page.) The Facebook page features some recent photographs of the ongoing restoration work. Earlier this year the Vitrolite on the facade was being repaired.