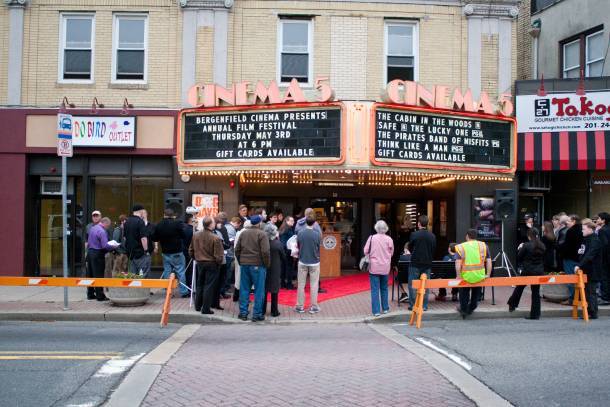 The Palace Theatre opened as a vaudeville house in the early-1920’s, by the Metropolitan Playhouses chain. The theatre was designed in Spanish Baroque style, and eventually switched over to an all-film policy. United Artists took over when they bought the building (and many others) from Associated Prudential Theatres sometime in the 1960’s.

The theatre featured a narrow lobby and wide auditorium with a balcony. One of the original Clearview Cinemas, the theatre was divided into a twin on November 26, 1986 and five-plex on May 19, 1989, with two auditoriums in the balcony (which was extended out toward the stage), two under the balcony, and one in front. The front auditorium was designed in ‘reverse’, meaning the projection booth was built onto the stage and the seats are facing out into the original auditorium, with some seats still on the stage-a mini ‘balcony’, sort of!

In 2001 Clearview installed new screens and digital sound. There are still many of the original designs to see, including the ceiling dome (half in each balcony auditorium) and some trim throughout the theatre. Sadly, the proscenium was mostly destroyed in the ‘plexing. The theatre is heavily involved in the community, and makes for a comfortable night at the movies…

In June 2013, Bow-Tie Cinemas too over as it took most of Clearview locations. Bow-Tie moved out on April 2, 2018 and the theatre now operates under independent management.

This survivor reopened post-pandemic in July, 2023.

Listed as a 2 screen independent theatre in the 1991 International Motion Picture Almanac.

I worked at the palace from ‘73 to '76 as an usher while in high school. I had a lot of good times, ate a lot of popcorn, and saw “The Trial OF Billy Jack” 65 times! During my time there, the dressing rooms were still mostly intact below the stage, and behind the screen, aside from the huge refrigerater size “voice of the theater” speakers, it looked as though not much had changed since the vaudeville days. The organ was long gone but the loft where I’m told the organist played was there and so was the ladder that he used to get up to his perch. I remember having to run down to the screen and pull open the curtains on either side of the screen for movies that were in “scope” and pulling the curtains in close to the screen for “flat” movies. For me, working in the balcony was the best, the projectionists, Sam and Earl were always fun to hang around with, although they were my fathers age, we usually had a good laugh at someone elses expense while I always grubbed one of Sams unfiltered Chesterfield cigarettes a cup of coke from the candy stand and filled the pocket of my red ushers jacket with popcorn. From the balcony, you could go out onto the roof, and when there was snow, we would wing snowballs down on unsuspecting Bergenfield shoppers, but we had to be careful not to be seen doing that as it would have meant sudden termination. The manager, Mr Mezzy, an old Hungarian, accent and all, was a funny guy, during Saturday Matinees, while the mothers dropped off their little little brats so that they could spend a few hours shopping in downtown Bergenfield, old Mezzy would be at the door ripping tickets, and telling the kids how cute they were, such little darlings! he would say, but once the picture was over, and we were trying to empty out the theater, he would be thundering “get out!! get out you little @#$!!&*% ’s GET OUT!!! There were a lot of good times and some scary times too, there was a local group of youth that would frequent the Palace, chipping in their undoubted drug money to buy one ticket, while the rest of the gang went around to the fire door nearest the bathrooms and waited for their buddy to let them in. There wasn’t much that 2 130 Lb ushers could do, there were usually 8-10 of them and they were members of the Bergenfield Football, Wrestling, or just plain tear your head off from your shoulders team, we didn’t stand much of a chance. My coworkers from Bergenfield High wouldn’t get involved because they saw these goons on a regular basis in school, so long as they were quiet, did their drugs in the far corner of the auditorium and didn’t bother anyone, we didn’t call Bergenfields finest. A few cops used to frequent the Palace, mainly to stay warm and eat some popcorn during the winter while walking a beat on Washington Ave. one cop that I remember, we called him Le vitche, I never knew his first name, at the time, he was a rookie, for all I know he’s probably chief of police now! well, I could go on and on, but for now I’ll leave, and say that I’ve been in the 5 plex and sure do miss the "one plex” palace

I’ve been there many times when it was still one screen. Nothing spectatular, but great fun! 2 occasions stand out; the all-day Planet of the Apes marathon with all 5 films. I walked in near the end of Beneath, and stayed for the other 3 films. Those kids were screaming so loud during Conquest, it gave me a huge headache. The overall quality of Battle did'nt help, either! I also went to see The Song Remains The Same, the Led Zeppelin concert film there. The film starts, but the sound is a little low, so the kids start to yell “Turn it up!” The manager refuses. The kids are screaming “Turn it up!!”. Still the manager refuses. These metal-heads want to stick their heads in the speakers and get their eardrums shedded, pronto.
The manager is leaving these hoods no other choice, they start stomping on the seats, breaking them and throwing them at the screen, or at each other. By the time the film is over, about 10 seats are broken, the screen has a hole in it, and one young man has taken it upon himself to urinate on the wall!! Incredible! All because the sound was too low. Gotta love those fine Bergenfield youths.

I went to this theatre (The Palace) also known then as Pops Palace, as a kid in late 40’s and into early 50’s. Sat. Mat. kiddie shows. The regular attraction was always a double feature and if one or both of the regular films were “kid” appropriate then they were shown with 10 cartoons and an episode of a serial, Batman, Superman, Captain Video etc. Often one or both of the regular attractions were not shown and westerns, Huntz Hall comedies, Abbott and Costello comedies, etc. were substituted. The bookings then were from Wed. to Sat. and then another show from Sun. to Tues. I would often go back to the movies on Sun afternoon. There was no kid show on Sun, just the regular 2 features. The manager then was George Hollman. Mid 50’s I became an usher at the Fox Theatre in Hackensack and also Assistant Manager there and also at the Englewood Theatre in Englewood. Late 50’s I became Assistant Manager at this Palace Theatre along with Manager Ernest Mezey. Mon. and Tues. nights were dish nights to attract lady patrons. Along with your ticket you got a free plate or cup, etc each week a different item until you got the whole set, eventually. I was Assistant at the Palace during such films as Mary Poppins, West Side Story, Gypsy, South Pacific and many many other classics. Many, many memories.

As of April 2, Bergenfield is no longer part of the Bow Tie chain of theatres. This theatre is no longer listed on Bow Tie’s website. It appears they may have gone independent. The marquee says all admissions are $5.00 A new website for the theatre has not been established.

Please update, became a twin on November 26, 1986 (Grand Opening ad in photos) and it was rename Bergenfield Cinemas in late 1983. UA Theatres during towards the end of operation under the Palace was a second run theatre.