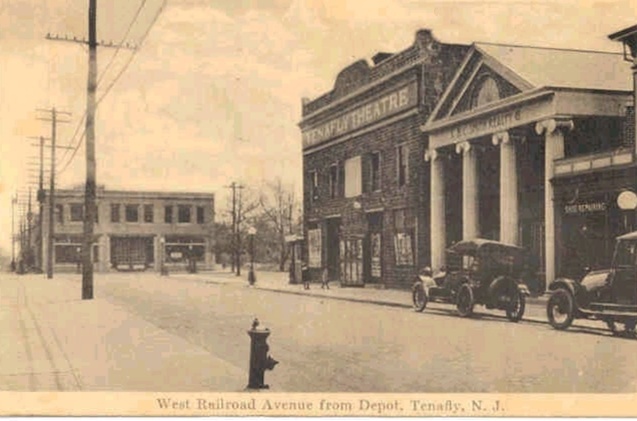 The Tenafly Theatre opened as a film house by 1926. It was renamed Bergen Theatre in 1927. It featured a very small stage, with a somewhat elaborate proscenium, and a tiny lobby. In 1994 it became the very first Clearview Cinema.

On December 25, 1987 it was divided into four, with one in the balcony and three downstairs, the proscenium is still intact in theatre #1, along with two of the original chandeliers and stained glass “EXIT” signs. Charming small-town theatre across from an amazing train station. In June 2013, Bow-Tie Cinemas took over when they took most Clearview locations. It was closed November 4, 2018. It reopened on November 20, 2018. It was closed on March 16, 2020 due to the Covid-19 Pandemic. By June 2020 it had been taken off the Bow Tie Theatres website.

“Malicious mischief committed by disorderly teenagers in the Bergen Theatre, Tenafly, N. J., has reached the point where operator Ray Rhone has barred the teenagers unless accompanied by adults. Among nuisances perpetrated, he said, were ripping seats, stripping tiles from lavatory walls and throwing eggs and other objects.

Particularly on Friday nights, Rhone asserted, the noise and general disorder were so bad that patrons could neither concentrate on what was on the screen nor hear the sound. In his opinion the ill behavior of the teenagers stems from lack of proper parental supervision. Tenafly area, incidentally, is a wealthy suburban district near New York with the price of homes ranging from $20,000 to $60,000."

not too far from this theater, there was a strange murder case that closed Tenafly Road, making the commute to this small theater a bit tricky. At least one suspect has been arrested in California.

A correction…..the Tenafly theater was bought by Clearview the same year it was founded, in 1994.

Hard to believe a Theatre running the “EXORCIST” first run would HAVE NO concession Stand.I honestly don’t think I have ever read that on CT.

Closed on November 4, 2018 awaiting a decision/vote on its designation as an historic landmark. If it isn’t designated as such, the theater would likely re-open.

The theater is reopening today!

The April 6, 1939 issue of Motion Picture Daily said that the Tenefly Theatre, formerly the Bergen, would reopen on April 8. This theater switched back and forth between the names Bergen and Tenafly more than once, as there are references to it as the Tenafly in 1928 and as the Bergen in 1956. An April, 1927 Exhibitors Daily Review item said that the remodeled Tenafly Theatre had recently reopened as the Bergen. The 1926 FDY lists it as the Tenafly. The July 7, 1958 Motion Picture Daily calls it the New Bergen.