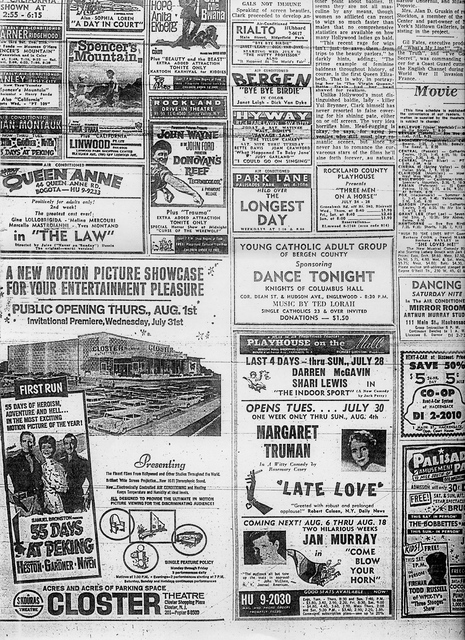 Another 1960’s shopping center theatre, the Closter Cinema was opened on July 31, 1963 with Charlton Heston in “55 Days at Peking”. It had 800-seats and was operated by United Artists until 1983. It became one of the first Clearview Cinemas from July 1, 1988. and was divided into four auditoriums in 1995. In June 2013, Bow-Tie Cinemas took over as it took most Clearview locations. It was closed in January 2016. It reopened in January 2018 as the CMX Market Cinemas Closter with 5-screens.

The theatre closed without much fanfare. The entire plaza where it was located is being leveled and built up again. I don’t know if the theatre will be demolished or kept standing but the theatre is no longer listed on Bow Tie’s website,and no listing at all in the local newspaper. The inside walls have been stripped of their poster frames and it looks pretty barren from the street.

I went by the plaza recently and it’s half opened, with Whole Foods and Target now opened. The other half of the plaza is finishing up and I understand is fully rented. They did, however, build a store in front of the theatre, so now the theatre looks more like it’s located in the back of the place, not as up front as it was. The theatre from the outside looks the same as it did 9 months ago. It looks like they just locked the doors and walked away. Any idea who is taking it over and when?

Please update, it was a United Artist Theatre until 1983, went independent until July 1, 1988 when Clearview Cinemas took over the theatre. It became a quad in 1995 under Clearview and 5 screens when CMX took over in 2018