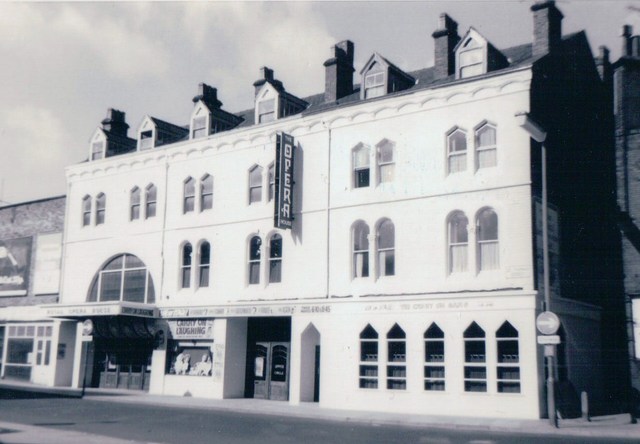 The building opened as Charles Adnams Grand Circus on 24th July 1876. It was a wooden building with velvet cushioned armchairs at 3/~; boxes at 2/-; pit promenade at 1 /- and gallery at 6d. It proved so successful that it was rebuilt more substantially using brick, designed by John Fetch, having a “costly and elaborately decorated interior and a roof supported by two rows of ornamental cast iron pillars arched from column to column; the capitals being enriched with shields and mottoes surrounded by banners”.

No trace of the 1876 building remained. It opened on 23rd July 1877, as Henglers Grand Cirque, and was renamed after its patron as the Prince of Wales Circus on 14th July 1878. Later this year C. Woodhead Esq gave a talk and demonstration of electrical light.

It was redecorated, rather than rebuilt in 1900 and renamed Zalvas Hippodrome Theatre. In 1906 after problems with the Justices over the renewal of the license the decision was taken to rebuild. Frank Tugwell (also Harrogate Theatre, Futurist Theatre Scarborough and Savoy Theatre London) was appointed but the building did not close until February 1908 when a mixed variety bill together with a film ‘The Talisman’ “a beautifully coloured film 1,500 ft long” was presented. The builders moved in immediately and, apart from the outside walls and the cast iron columns, demolished the building.

The replacement opened 27th July 1908, completely changed as the New Hippodrome Theatre. The decor was blue, white and gold. On opening in 1908 a capacity of 2,000 was claimed for a programme of twice nightly variety. The seating was divided between Orchestra Stalls, Pit Stalls and Pit on the ground level with Grand Circle and Gallery above, together with the 6 boxes. There was a promenade behind each level and in an emergency the building could be evacuated in under 2 minutes.

The auditorium was of great interest and unusual design. The circle being placed high above the stalls, resulting in excellent sightlines from the rear stalls and the absence of the claustrophobic feeling associated with this area in many theatres. The circles were partially cantilevered with one supporting pillar at stalls and dress circle levels. There was a unique arrangement of boxes either side of the proscenium with two at circle level and one suspended above stalls level. The upper circle had a serpentine front which is returned to the stage wall. Both circles had richly decorated plasterwork in the form of scrolls and masks. The auditorium was almost separate from the foyer block (virtually freestanding) and was joined by just a passageway.

It remained open throughout World War II and became a repertory theatre from 1947 with occasional tours until 2nd October 1971 when it closed with ‘The Jockey Club Stakes’ starring Wilfred Hyde White.

It was rescued after near dereliction and reopened with “Carry on Laughing” with Kenneth Connor on 16th June 1976 as the Royal Opera House, after a 200,000 pound restoration (including purchase price). A new roof had to be provided, redecoration in red cream white and gold, new carpets and seats and the Showboat bar at the rear were also supplied. The architect was Dennis Hitch.

The theatre seated 970 on 3 levels, the acting area was 9.75mtrs x 8.53mtrs with 28 hemp lines, the 12 dressing rooms could accommodate 55, and there was an adequate orchestra pit.

It later became a cinema under the control of Jays Entertainments (mainly based In Great Yarmouth). It was used as a location in the Michael Winner film of “A Chorus of Disapproval”, adapted from Scarborough’s most famous resident Alan Ayckbourn’s play.

In 1995 after a run of the film “Batman” it closed and was shuttered, but insufficiently securely to prevent arsonists entering and setting the building alight. Taps were also left on and the buildings anti-flood pump was turned off. Inevitably this took its toll on the fabric of the theatre and in 2003 the foyer block was demolished. The auditorium befell the same fate in 2004.

The demolition team commented that the structure of the building was still sound and had been restorable. What a waste!

Photographs of the demolition can be found here
View link

and in happier days an interior shot here
View link