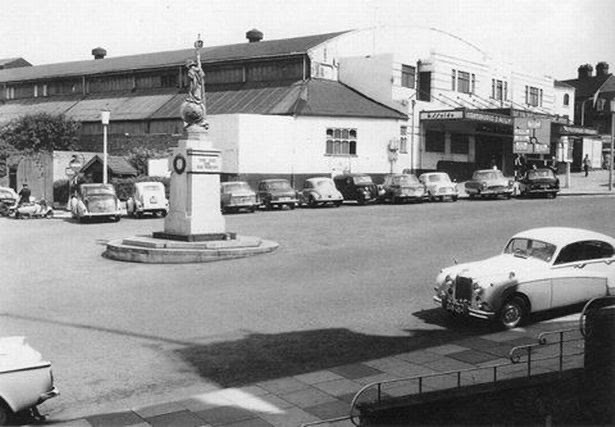 Located in the Potteries town of Hanley on Albion Square at the corner of Cheapside and Stafford Street. Built in 1907 as a skating rink, by 1915 it was re-named Palais de Danse. It gained a Cinematograph Licence in May 1921, but continued its use as a skating rink & dance hall. Following alterations by Palace Amusements Ltd., which included a new façade, the Palace Cinema was opened on 26th December 1932 with Ramon Navarro in “The Impossible Lover” & Laurel & Hardy in “County Hospital”. All seating was on a single floor. It had a 36ft wide proscenium and was equipped with a British Talking Picture(BTP) sound system. There was a café for the convenience of patrons.

In March 1955 it was taken over by the Newcastle-upon-Tyne based Essoldo chain and it was equipped with CinemaScope and the proscenium was widened to 45ft opening on 9th May 1955 with “There’s No Business Like Show Business”. Major musicals such as Gordon McCrea in “Carousel”, Yul Brynner in “The King & I” played here. In January 1960 Leslie Caron in “Gigi” was on the screen and a Hammond Lafleur touring style organ was installed and played by organist ‘Nanette’ who entertained the audiences pre-show. It was closed on 26th May 1962 with the nudist film “Naked as Nature Intended” starring Bridget Leonard & “The Call Girl Business” starring Anita Ekberg.

It was demolished in 1963 and a new building on the site contains shops and a bingo club which became a Gala Bingo Club that recently was renamed Buzz Bingo.