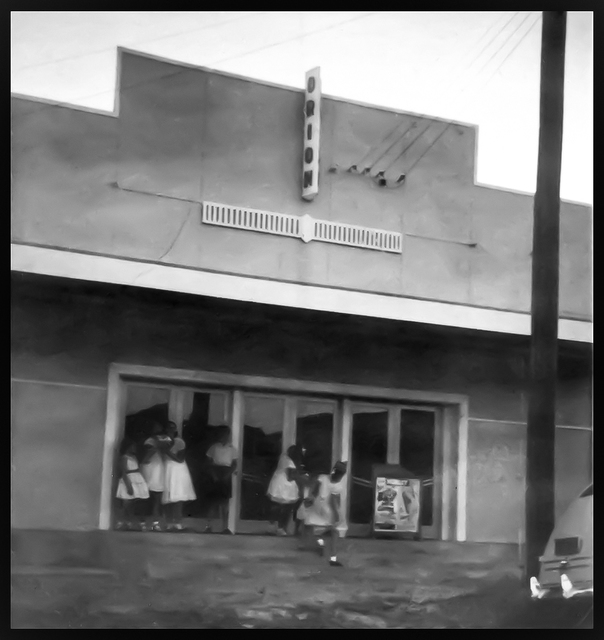 Located in Canley Heights to the west of Sydney. This is a story of endeavour, but more so, it’s the story of a mighty Picture Show Man. For what I am about to write I have one regret. I wish that Fred Hawkins was alive to read it. The application to build the Orion Theatre in Canley Heights had been submitted by Fred in 1946, following the end of World War II. There were several different enemies…The Department of Building Materials, The Chief Secretary’s Department & The Theatres & Films Commission. During this period two local members Mr. J.S. Freeman & Mr. Jack Mannix lobbied ceaselessly on his behalf, but it wasn’t until November 1955 that the Commission after exhausting all avenues threw up their hands and finally granted him a licence.

The victory was short lived when Suburban Cinemas P/L operating as Hoyts in nearby Fairfield, and the Madich Brothers (owners of the Cabramatta picture theatre) lodged an appeal against the licence. They asked the judge to reverse the approval, as the area was a semi-rural community with a population of 11,000 and did not need a theatre. They argued that existing theatres in the area were sufficient to fill its needs. A three day court case began in 1956 to hear the appeal. To Fred’s dismay their appeal was successful, however Judge Harvey Prior ruled that it had only succeeded only on a technical point. A further application was swiftly submitted and the licence was finally granted on February 15, 1957 to F.G. Hawkins of Cranley Vale, there-by ending a costly soul destroying eleven years battle. Judge Prior said that he sympathised with Hawkins as some existing theatre owners had adopted a dog in the manger attitude towards newcomers. For Fred, these words came from heaven, despite the introduction of television he would now go forward and build his own theatre.

The Orion Theatre was opened on 31st March 1958 to turn-away crowds with a double bill from Universal Pictures, consisting of “Thunder Bay” starring James Stewart & “Bonzo Goes to College” starring Maureen O'Sullivan. This was the culmination of nine months of back breaking work for Fred and his friends, who had constructed the building over many weekends with hammer, nails and a welding torch. The Biz(Fairfield NSW) newspaper reported “The Orion Theatre was officially opened by Mt/ N.J. Naninix, State Member of Parliament for the district, who complements Mr. Hawkins the proprietor on his tenacity and enterprise, along with very comfortable appointments of the new theatre. This will serve our growing district for many years to come he extolled. Mr. Fred Hawkins expressed his thanks to all and announced that the theatre would operate every night of the week, with a complete change of programmes three times weekly”.

The Orion Theatre had a capacity for 350-seats, and consisted of both front and back stalls in a single steel frame building. A crying room had been installed with comfortable seating, and a sound-proof glass window, fitted and tilted to avoid reflection. The foyer was wrapped around the projection box and was constructed with brick lined Gyprock for fire proofing, and also featured a well stocked concession bar. Vinyl plastic floor tiles in green & yellow provided the dominant colours, which the foyer ceiling and walls were lined with asbestos cement and hardboard painted in pastel colours. The auditorium was remarkable for its simple inexpensive yet attractive finish. The layout was traditional except for the absence of stage curtains. The interior walls were lined with hardboard painted forest green. The original projection equipment featured Minerva projectors and sound heads sitting on solid 12 inch concrete blocks. A Westrex amplifier and Paradise anamorphic lenses completed the installation. Two years later there was an upgrade consisting of C & W projectors on RCA sound heads with Westrex amplifier. The first CinemaScope presentation featured the Warner Bros. production “Bomber B52”, which was followed by “The King and I”. Much was made of CinemaScope in the local press. Fred later was able to catch up with screening “The Robe”, “Three Coins in the Fountain” and “High and the Mighty”.

In addition to operating the theatre Fred had established an agency for Stromberg-Carlson, which would operate in the front foyer of the Orion Theatre during daylight hours. Here he sold TV’s, radio’s and record players. The Orion Theatre ran successfully for a five year period, until attendance’s were reduced by the inroads of television to untenable levels. Fred’s theatre was demolished in the closing months of 1963. A building named West Village containing retail units, restaurants and a gymnasium now stands on the site. Fred’s fight to build the Orion Theatre is the stuff of what movies are made of….An enduring legacy of affection remains for those who remember the amazing cinematic exploits of Fred Hawkins, independent exhibitor and mighty ‘Picture Show Man’.