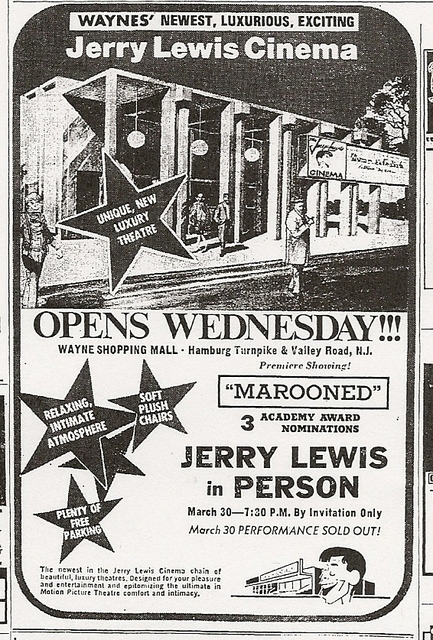 This was the first of the Jerry Lewis Cinemas chain to open. The Jerry Lewis Cinema was a single screen, opening on March 30, 1970 with Gregory Peck in “Marooned”. Jerry Lewis appeared ‘in person’ on opening night. It was later twinned and became the Valleyview Cinemas. It closed in 2005, and was converted into a restaurant.

I think the Valleyview Cinema is now Extreme Kidz Parties.

From 1969 to 1980, the National Cinema Corp. franchised “Jerry Lewis Cinemas” as a business opportunity for those interested in theatrical movie exhibition. A harbinger of the cookie-cutter “cineplex” type movie theaters that would become popular in the 1970s, a Jerry Lewis Cinema was billed in franchising ads as a “mini-theatre” with a seating capacity of between 200 and 350. Though billed as “luxurious and plush”, the actual theaters were not luxurious, but not bare-bones either. Jerry Lewis Cinemas stated that the theater could be operated by as little as a staff of two due to automation and the fact that the franchisor would provide support in booking films and help in other areas of film exhibition.

National Franchise Corp. successfully wooed Lewis to provide his name and star-power to the franchising operation. As well as bearing his name, each Jerry Lewis Cinema bore a sign with a cartoon logo of Lewis in profile. The theaters were pitched to investors that were not movie exhibition veterans, pitching owning a movie theater as a “mom and pop” operation.

There initially were 158 territories that were franchised, with a buy-in fee of $10,000 or $15,000, depending on the territory, for what was called an “individual exhibitor”. For $50,000, the Jerry Lewis Cinemas offered an opportunity known as an “area director” in which investors not only were given their own cinema, but controlled franchising opportunities in a territory.

The success of the chain was hampered by the chain’s policy of only booking second-run, family-friendly films. Eventually, the policy was changed, and the Jerry Lewis Cinemas were allowed to run other, more competitive fare, but after a decade, the chain failed. Both Lewis and National Cinema Corp. declared bankruptcy in 1980.

Wayne, NJ was the first Lewis theatre anywhere. The first publicity, press conferences, etc., about the start of the company was in Sept. 1969. The problems came to a head in 1973; it took until 1980 for the bankruptcy to go through, apparently. 1970-71 were the better years but the downfall was 1972-73. At that time many of the theatre operators were bolting from the Lewis franchise and either closing or went independent and dropped the Lewis name.

Very interesting. This theater in its final years didn’t do as well as the Preakness and the loews/sony/amc wayne theater.

Yes CJ1949 is correct. My father was a projectionist at the Jerry Lewis Twin Cinema in Carteret. Opened on 6/7/1972. That first year was fantastic but as soon as 1973 started, the movie bookings went double feature, prices were reduced and soon payroll wasn’t being met. He stopped getting payroll checks from Network Cinema Corp in March 73 and from then on it was run by an independent. Kind of sad in a way because it was a nice little twin in a great shopping center right off exit 12 of the turnpike.

Jerry Lewis Cinemas were almost a good idea, and the theatre design was ahead of it’s time for running a small theatre with minimal staff.

The problems were fourfold.

First, the franchisees were required to purchase their equipment, supplies (including concessions), and book their films via Network Cinemas, which tended to charge more than other suppliers and bookers. They were at a competitive disadvantage before they opened the doors. No wonder these franchises were marketed to people outside the industry. Anyone who owned an independent theatre realized that they could do everything Network Cinemas was doing cheaper themselves.

Second, they had no product. When you go into a McDonald’s, whether it be in New Jersey or New Mexico, you know what is on the menu. Same with Midas Mufflers. They have a product that the parent company can promote regionally if not nation wide. Network Cinemas owned no distribution rights to any movies. Each franchisees had to “bid” how much they would pay to play any given movie individually, as was the practice at the time. That meant that Network Cinemas could not promote anything as being exclusive to their theatres.

Third, Network Cinemas had a policy of only booking “family” films, just as the industry started shifting to “R” rated for many big releases.

Finally, while Jerry Lewis still had some great films in him through the 1970’s and 1980’s, his name was no longer the boxoffice magic that would make people flock to the cinema.

I got sad news for you Al. The man whose name graced many theaters has died at the age of 91.

Yup, He died 45 years after his theatres did.

Once Cinemark opens its doors, there will be three theaters in Wayne, just like the last time this theater was around. 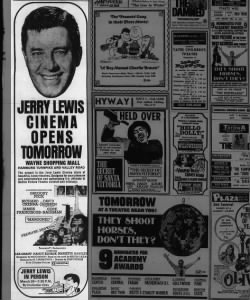