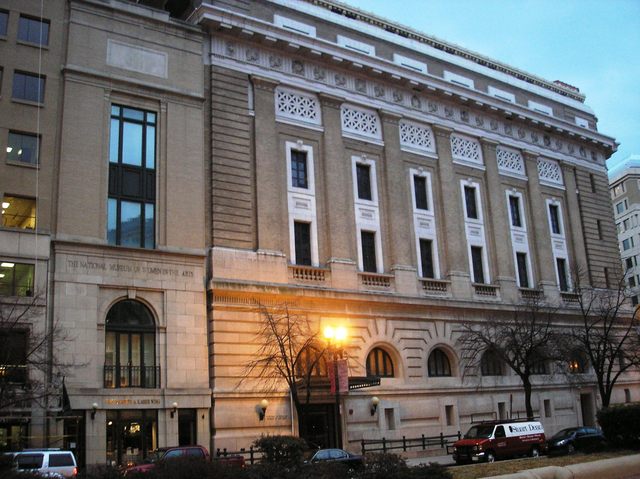 Originally opened as the Pix Theater on October 3, 1941. It was located not far from the White House. It was renamed Town Theatre in 1959. After it closed as a movie theater it became a museum.

I only saw a handful of films at the Town: TO KILL A MOCKINGBIRD,
HOMBRE, THE DIRTY DOZEN, AROUND THE WORLD IN 80 DAYS, and CHITTY, CHITTY, BANG, BANG.

After the 1968 riots it became unsafe to park on the streets in the area. I started college in 1969, and confided my downtown theater going to Keiths and the Palace.

I was in D.C. from early 1960 to middle of 1966. Most of the films there were Fox, Paramount, Columbia or Universal and were either Move overs or Re-Issues except for Fox. Around the World, Spartacus and other big 70mm films. I don.t believe The town could show 70mm so everything was 35mm.

I was the last person to manage the Town Theater just before it closed in 1983. I can give a little history from the 1970’s until its closing.

In the 70’s, The Town Theater was owned and run by a man by the name of “Don King” (no relation to the boxing promoter). Mr. King also had several other movie theaters in Washington DC- The Senator, The Penn, and The Capital Hill Cinemas 1 & 2 (Note: The Capital Hill is not found on this site, but was located in the 500 block of 8th Street SE).

From around 1980, business was fair most of the time, with an occassional “big hit”. The price was good at $3.50 adult ticket, for a double feature. There were regular customers that came every week, regardless of what was playing there. One big moment was in 1981, when “Body and Soul” (remake) starring Leon Isaac Kennedy opened. Leon and his wife Jane were at the premier on opening day. The biggest hit during the 1981 period was, without a doubt, “Richard Pryor Live on the Sunset Strip”. It played alone for several weeks, and the weekends always sold out.

In late 1982, Don King turned full management of the Town Theater over to KB Theaters, a company that was thriving at that time. TO BE CONTINUED>>>>>>>>

I doubt it’s the original screen but there IS a theater space inside the National Museum of Woman in the Arts building – that can present film screenings.

Before I continue with part two of my article above, I’ll address “Giles” comment about the National Museum of Woman-

I visited there recently, and I can assure you that the old movie screen and stage from the days of the Town Theater, are completely gone. The auditorium itself is still there, in its same location, but the only thing original in there is the ceiling. I believe its been restored, but its the same ornate ceiling I remember from back then.

Now for PART 2 of the post I started above:

So, in 1982, with owner Don King aging and becoming overwelmed with running the business, theater operation and management of the Town Theater was turned over to the KB Theater chain. They were very big in the Washington DC area at that time, and also ran the Haagen-Dazs ice cream store chain at that time.

The problem with the KB chain was that they didn’t seem to have a knowledge of running grindhouse-type theaters in the rougher urban areas of the city. Coming in, they made three big mistakes-

1- Raised the ticket price to about $5.00 (this was top dollar adult price for their other Georgetown / Northwest theaters.

2- Stopped the double-feature, showing only a first-run movie.

3- Cleared the auditorium after every show.

It was quite clear that they thought that this would persuade “better clientele” into the theater. But what it did was cause us to lose many of our regular customers, and much business was lost. KB also did a poor job of picking movies for the Town Theater. Gone were the great Shaw-Brothers karate movies and popular horror movies that had done so well in the previous years. To KB’s credit, they did do very well for the Capital Hill Cinemas 1 & 2, as they experienced a sharp increase in business.

By the end of 1982, the Town Theater losing too much money, so Don King decided to pull management from KB and sell his theater business-The Town,The Senator, Capital Hill 1 & 2 (The Penn had closed in 1982, before KB was involved).

sorry to disrupt your flow there nick3 – great read by the way, I remember the theater when they were showing their horror movies at the beginning of 1980 – I was too young though to go see movies and the R/unrated flicks that were being shown. I think Lucio Fulci’s ‘Zombie’ was shown here.

Hey Giles- No problem at all. To address what you said about the horror movies-

Now for Part 3 of the story-

So after the failure of the KB Theater company to improve the business at the Town, Mr. King sold the Town Theater (as well as Senator and Capital Hill Theaters) to two guys, Dick Dacy and Bob Rackenspurger, who ran a small film distributing business for the cheesy drive-in type movies (I believe they may have distributed X movies as well). They became “Gateway Theaters” with the three cinemas, and hoped to possibly expand.

The good thing about Bob and Dick, is that they came into the theater business with an open mind (unlike KB), taking advise from those of us that had been at the theaters for a while and could share opinions and ideas. The first thing they did was to restore the double-feature and lower the ticket price a little. Business began improving at the Town, and at the Senator Theater as well. Many of the long-time loyal customers returned, and business was back to what it had been a couple of years earlier, average to good, with the occasional “hit”.

Another good decision made under Gateway was to bring in the “All-Night Show”. A man named Ray Bently who was based out of Richmond, would rent time (midnight to 7AM) at movie theaters in urban areas, would put together themed-shows (black exploitation, horror, etc.), and advertise on popular radio stations in the area. These shows would often sell out on the weekend. Bently would profit from the ticket sales, and Gateway profited from the concession sales, so it was prosperous for all parties involved. These types of decisions helped keep the theater afloat during Gateways time.

Then, towards the end of 1983, we received the news- The Town Theater was losing its lease in the Masonic Temple building, as the owners of the building were already in negotiations, and the rumor was that it was going to be some sort of “women’s museum”, which seemed totally crazy at that time, as the block was full of peep-show businesses and seedy clubs (The Room, The Brass Rail, etc.)

It was ashame, because Bob and Dick had expressed interest in keeping the theater going, and possibly converting it into a “twin” cinema, like the Capital Hill.

Well, as they say, all good things must come to an end. The doors closed for good in February 1984. Some employees had been there for many years, although most of the real veterans left when KB took management. Thanks for reading, and anyone with additional info please add. I’ll check back for questions as well.

This theater/building has a very interesting history (as noted in Robert K. Headley’s book: “Motion Picture Exhibition in Washington, D.C.”). Built in 1907-1908, the Masonic Auditorium began showing movies (and vaudeville) from 1908 (!). The first floor auditorium which ran the entire first floor was able to seat almost 1,800 people. A second auditorium was located on the fifth floor that seated about 700 patrons. When the building was converted into the museum, the first floor was remolded into a grand hall and a new 200 seat auditorium on the third floor.