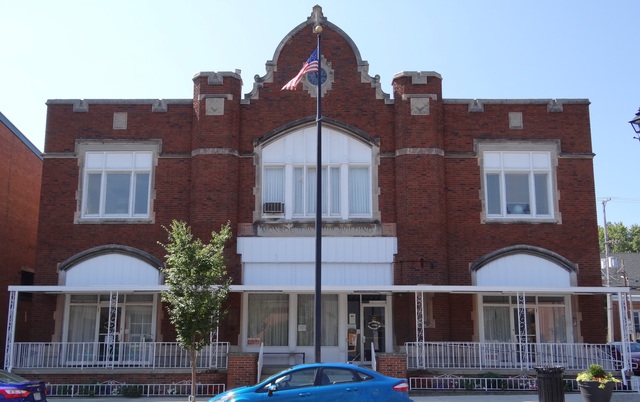 The 1948 Sanborn shows movies being shown in the Monroe Township Building, a large civic structure constructed in 1916.

This structure included an auditorium and stage when and opened on April 6, 1918 as a movie theatre It was closed from 1931 to 1937. It’s unclear whether this space was leased to an operator, or if the city ran the theatre. It had reopened by 1938.

The Auditorium Theatre was fairly large, with a small stage at the rear wall, and a balcony. Entry was through a center door, giving access to a narrow transverse lobby running behind a small office on one side and a public restroom on the other. Doors at either end of this hallway led to staircases up to the balcony. It was still open in 1955.

At some point, numerous office spaces were created in the western wall of the building, facing S. 3rd Street. It is unclear if any of the auditorium remains, and the building is used by various local government and community organizations.

The May 4, 1918 issue of the Motion Picture News mentioned that Tippecanoe City could boast having “the finest motion picture theatre for a town of its size in the state”, the Auditorium, which opened on April 6 with Messrs. Bennett and Partlow handling the management. These gentlemen also operated the other movie house in town, the Majestic. Ownership of both changed more than once thru the years.

The Auditorium was listed in the 1925 edition of the Film Daily Yearbook as part of a small circuit (it and the Majestic) and in the theatre listings from 1926-37. It closed briefly in 1930 during an ownership change and the installation of a Western Electric Sound System.

The December 24, 1931 issue of the Film Daily noted that the Auditorium had recently closed, this was reflected in the FDY in its 1932-37 editions which listed it as closed.

Under “reported theater changes” in the July 27, 1937 issue of The Film Daily there were two items from Tippecanoe City; under changes in ownership, that the “Tipp” was transferred to Mr. Sam Gorrell and under name changes, that the Auditorium had become the Tipp. The 1938 thru 1947 editions of the FDY lists the Tipp. The 1948 edition lacked a list of theatres, but beginning in 1949, the Tipp was listed as the “New Tipp", it was still listed as open in 1955.

Seating varied over the years. An obvious typo in the 1927-29 editions of the FDY claimed 250 seats, from 1931 thru 1937 it was listed at 936. A 1930 ad for Western Electric that mentioned their sound installation claimed 893, which I believe was accurate. However, beginning when it reopened in 1937 as the Tipp, it was listed with only 500 seats for the entire time it carried that name. As the New Tipp, seating shrunk by another hundred, to 400.

Architects were Schenck & Williams. For some reason, I am unable to upload a photo of this.