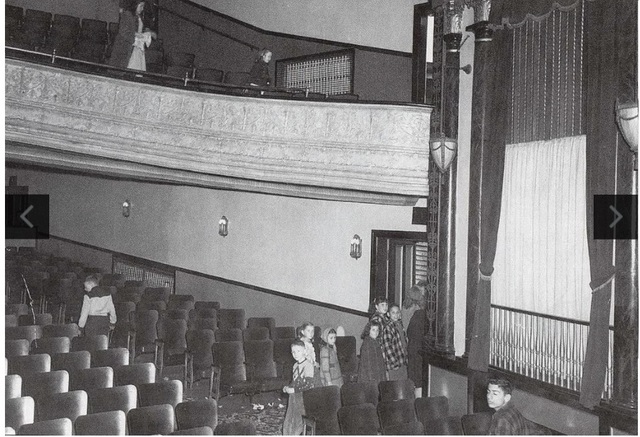 From 1900, the theatre was the Danielson Playhouse. By 1914 it was screening movies as the renamed Orpheum Theatre. In 1954, the name changed to Danielson Cinema which it remained until a huge fire burned it to the ground in 1978.

I only visited this theatre once, to see a showing of CABARET in the 1970’s. Recently, when driving through Danielson from Rhode Island, where I live, I looked for the theatre and wondered what had happened to it. Now I know. I remember it as place with some character.

These first three old photos are of the Orpheum Theatre in the 1950s.

Uncertain if this is the Danielson/Orpheum. Taken in 1912.
OVERLAND WESTERNERS

Henry Johnson, manager of Interstate’s Orpheum Theatre, Danielson, Conn., recently completed his 30th year as a motion picture exhibitor, and received many congratulatory messages from industry friends and townspeople. A well-known figure in civic affairs, Johnson started his business as manager of the Orpheum when the house was under the old S&A Amusement banner. When Interstate took over in 1928, he remained. His special interest is the chidren, all of whom call him Uncle Henry. He treats them to special kiddy shows and always has a kind word for them.

1928 reseating and redecorating.
Item from Boxoffice magazine files, October 6, 1928, republished October 8, 1938:
“The Orpheum at Danielson, Conn. has reopened after having been completely reseated and redecorated.”

The Orpheum Theatre was at 12 Center Street. It was listed as the Orpheum in the 1914-1915 American Motion Picture Directory.