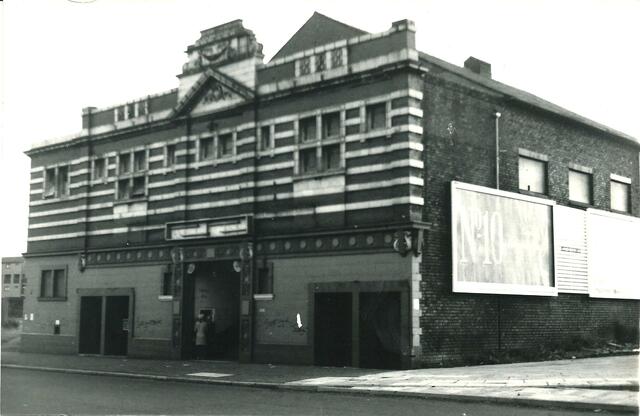 The opening of this cinema, in the Edge Hill district of Liverpool, was announced in the ‘Kinematograph Weekly’ of 24th December 1914. The Tunnel Road Picturedrome was an imposing structure, with a tall, wide frontage, the upper part of which was of red brick relieved by broad horizontal bands of buff-coloured stone. There was seating for 840 patrons, with 500 in the stalls and 340 in the circle. The proscenium was 54ft wide.

Favourites in the early days were comedians Charlie Chaplin and Harold Lloyd and ‘serial queen’ Pearl White, who often resulted in the ‘House Full’ signs being brought out.

Orchestral accompaniment to the silent films was replaced by Western Electric sound when the talkies arrived. The ‘Old Tunny’ faced stiff competition when the super cinemas started to arrive, but it ended up being one of the longest surviving suburban cinemas, initially closing only for a brief period following bomb damage in September 1940.

By 1953, according to the Kinematograph Year Book, the seating capacity had been reduced to 750.

From 10th July 1961 it became known as the Avenue Cinema screening Terence Morgan in “The Shakedown” & Sergey Bondarchuk in “Destiny of a Man”, but a bitter blow was the demolition of practically all the surrounding houses. The cinema soldiered on, but the greatly reduced local population inevitably led to its eventual closure, on Saturday 7th December 1968, with Cliff Richard in “Finders Keepers” and “Ambush Bay”, starring Hugh O'Brian and Mickey Rooney.

The building continued on bingo as the Tunnel Club, but that closed in 1984. The disused building was badly damaged by fire in 1995, leaving only the frontage and outer walls, which were later demolished.

The first ad as Avenue posted.