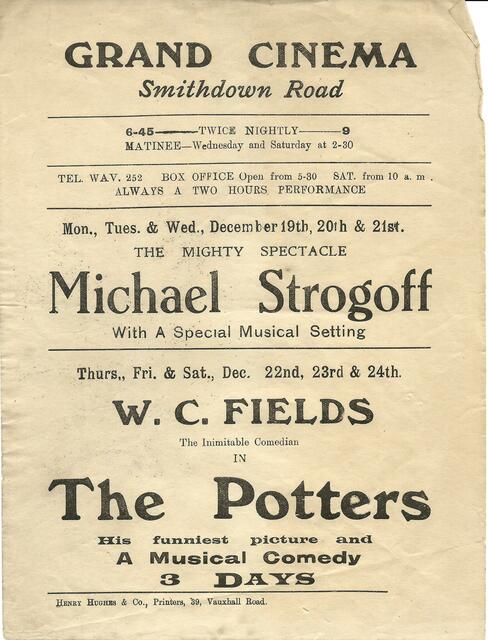 In the Liverpool district of Sefton Park, to the south of Wavertree, at the junction of Smithdown Road and Fallowfield Road, the Grand Cinema opened on 26th July 1913 at 2pm, with evening performances at 7pm and 9pm. It was operated by T.H. Hughes.

Less than two years later, the Grand Cinema was one of the few Liverpool cinemas to show Edison Kinetophone Talking Pictures, a sound-on-disc system introduced on 26th April 1915, when special posters advertised that the human voice could be heard in synchronisation with the pictures. However, this was a temporary novelty, and silent films and the orchestra continued until the talkies truly arrived, on 30th March 1930, with “The Desert Song”, starring John Boles, following the installation of a British Acoustic(BA) sound system.

The Grand Cinema became a Gaumont-British cinema in 1928, having been acquired by Denman Picture Houses Ltd., a subsidiary of G-B. Being one of the circuit’s smaller cinemas, the Grand Cinema showed later runs of the circuit releases and, by November 1952, declining audiences had led to evening-only performances.

Although it had insufficient width for CinemaScope, that system was installed, with shows beginning on 4th August 1955 with “The Black Shield of Falworth”, starring Tony Curtis.

But that did little to improve attendances, and the Grand Cinema closed on 29th September 1956 with “Indian Scout”, starring George Montgomery, and Ben Lyon and Bebe Daniels in “The Lyons in Paris”.

The building was demolished and a petrol station stood on the site. Now a car dealership.